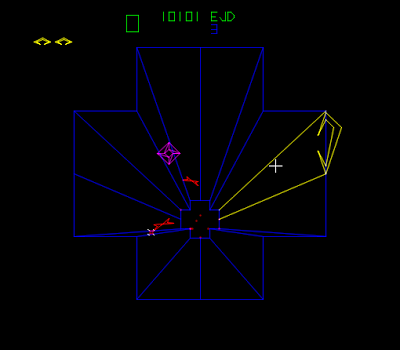 The Museum of Modern Art is proceeding further with their video game acquisitions, now picking u a handful of early classics along with Minecraft. I'm a little embarassed to admit that I've never played some of these revered titles, even though I'm well aware of their legacies. Thankfully, Mostafa Heddaya over at Hyperallergic has compiled a list of sites where you can play these games online. Sure, it's no the same as using the true original controllers and arcade cabinets, but at least you can hold onto your quarters.

I love the sound design in these old games. They make such great use of different kinds of noise to intense effect. Vector graphics pioneer Tempest is probably my favorite of the group. When you complete a level, the camera zooms in through the opening in the center of the stage with this great, building whoosh sound. Yars Revenge has amazing noise-y sounds too. They also serve as an audible complement to the scrambled rainbow of pixelated mess that acts as a kind of force-field dividing the screen. Next time I'm given the chance to play these games on original hardware, I'll definitely take advantage of the opportunity. Until then, at least they're freely accessible as Flash games.
Posted by Dan Solberg at 10:00 PM