Blips: You Have No Choice 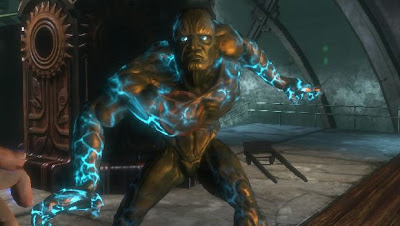 I only played the original Bioshock for the first time a couple months ago and never got around to writing anything about it, so I was delighted to see Sam Barsanti's new interpretation of the game's contentious final act. This post and Barsanti's are full of spoilers by the way. To summarize Barsanti's take on the last third of Bioshock, after Andrew Ryan's dying tirade about the differences between "men" and "slaves," the game pushes you through a string of tired video game objectives (fetch quest, escort mission, etc) that, when presented in succession, call greater attention to Bioshock as a video game than it had prior. These game-y portions aren't executed with the same level of quality and openness that Bioshock seemed to have before the Ryan plot twist. Despite your character being released from mind control, your path feels narrower and duller than ever. Barsanti sees this as Bioshock commenting on the perceived freedom through choice in video games, and cynically telling the player "you have no choice."

For the most part, I can get behind this interpretation, but I question the necessity of those video game-y missions to be below-par experiences. I think it says something pretty damning about video game players that the parts that would make us step back and acknowledge the medium we're engaging with are some form of laborious punishment. Do the game-y parts have to be the parts that are terrible? In fairness I don't think the last section of Bioshock is all bad (I actually like how Fontaine turns into a living statue of Greek Titan Atlas in the final boss fight), but that escort mission was one heck of a slog. I like to think that Bioshock could have made the same point about the lack of freedom and choice in games while still offering fluid, unbroken versions of those video game tropes. Then again, maybe the disappointment is integral to driving home the frustration about perceived choice versus actual choice.

If nothing else, I'd argue that players always have a choice when it feels like a game is exploiting their time and energy: they can stop playing it.
Posted by Dan Solberg at 4:39 PM