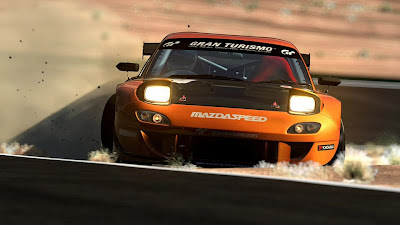 If you haven't heard, there's a film in the works based on Polyphony Digital's Playstation-exclusive racing simulation franchise, Gran Turismo. Many folks were puzzled by this, seeing as Gran Turismo is full of real world cars, a bunch of real world racing courses, is not affiliated with any official racing leagues, and, perhaps most damningly, features no characters. The movie rights were sold based on a recognizable car-centric brand, and pretty much nothing else. It reminds me of when that Asteroids movie was in the works. Who would you have cast as the triangle?

I actually find the prospect of a blank page for the story somewhat exciting, though it's easy to envision the lowest-common-denominator plot that's likely to form for Gran Turismo, should the project ever get off the ground (few of these game-to-film adaptations do). I think it would be cool to have a movie about professional racecar driving without having to throw in street racing or science fiction tropes. Still, I can't help but picture a bland product at the end of this, so I thought of a few ideas to spice up this would-be movie, while staying true to Gran Turismo's roots.

- Jazz: You can't have Gran Turismo without jazz. Maybe the lead character's mentor could prescribe sage advice while laying down some hot pop organ melodies. There has to at least be jazzy drum breaks during pit-stop montages. Or how about a sultry downtempo number when characters are weighing the benefits of different shock absorbers in the parts shop?

- License Tests: Getting acceptable medals in license tests is kind of the worst part of Gran Turismo, but it's also a definitive section of the game. They wouldn't need to be shown in full, but maybe the protagonist has to practice cornering in a Mini Cooper or something.

- A-Spec: At least once, instead of a character referring to someone's racing performance as "cool," they should call it "totally A-Spec." GT3 fans will get the reference, and it sounds better than "that's so HD Concept."

- Engine Sounds: Polyphony is famous for their attention to detail, recording engine sounds for every car in the game based on their real-world models. This accuracy should be carried over, but as an Easter egg, swap the engine rumbles of two of the cars and see if anyone cares.

- Mazda Miata: At some point, our hero has to buy a Miata because for some reason it's the only accepted car in the Roadster race. He/she sells the car immediately after.
Posted by Dan Solberg at 10:30 PM