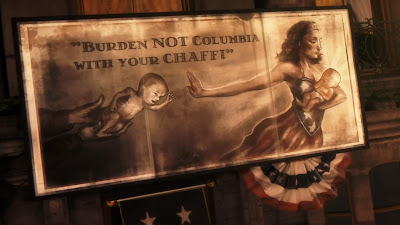 I'm really digging the latest piece over on re/Action by Stephen Beirne on the classist nature of gaming's critical discourse and the concept of avoiding spoilers. Even though the prices of games have come down in indie categories, popular, big-budget games are still $50-$60. What is cheap and expensive is all a matter of perspective, but there are a great number of people who love to play games who can't afford these games at their initial launch prices and rely on used copies or sale prices to bring games into an affordable range. Yet, the discussions around games are most fervent initially after a game's release, and if a game is lucky it will spur discussion for a few weeks after. For example Bioshock Infinite held critics' attentions for about three weeks past its release, but most games are lucky to get that level of focus for a day or two.

This leads to folks who can't afford games at launch having to wade through minefields of spoilers, minor or otherwise, in order to be involved in critical discussion in any way. What ends up happening is that if these people end up purchasing and playing a game a few months later, their experience is colored by critics and commenters, not of their own making as those very critics and commenters had the privilege of experiencing. It may just be the way business happens, but it's worth understanding the consequences and who does and does not have a voice in critical discourse.

If there's one thing I'd have liked to see more of in Beirne's piece, it's ideas for solutions or improvements. He does acknowledge that indie games are now offered at more affordable prices than their big-budget cousins, so that lowers the barrier to entry for certain games. What about those blockbuster titles though? The zeitgeist moves so quickly, it can be difficult to keep up. After all, the reason there's so much discussion about games at release is because so many people are engaging with the same material at the same time. Think of it like a book club, but one where the market determines which book you're reading next instead of group vote. To tell the truth, I don't really have any ideas for solving this problem. Perhaps something like the Vintage Game Club could be of use for this purpose. I'd love to hear other people's suggestions too. Until then, I'm going to start playing Uncharted 2.
Posted by Dan Solberg at 10:00 PM