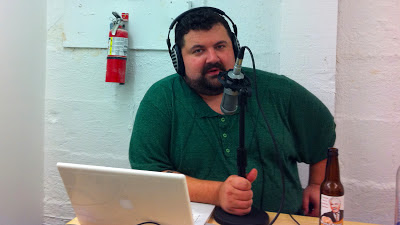 Today it was announced on Giant Bomb that their Senior Editor, Ryan Davis, 34, passed away this weekend.

I never met Ryan Davis in person, or really spoke with him directly beside a rudimentary private message about merchandise shipping, but because of his significant presence on Giant Bomb (the top link on my sidebar for good reason) over the years, it feels like I've spent hundreds of hours with him. Ryan hosted the weekly Giant Bombcast podcast as well as several of the site's regular and semi-regular livestream programs. He had a great talent for moderating discussions and impeccable comic timing. He knew when to let guests speak and when to move things along. Giant Bomb is founded on its editorial personalities, and the report between Ryan Davis and fellow co-founder Jeff Gerstmann was unmatched in the industry, providing more laugh-til-it-hurts moments than I can count. He knew when a bad joke was the good kind of bad, the kind where you can wring the awkwardness out of the room for comedic effect. Ryan was a genuine entertainer.

Through Ryan Davis' work on Giant Bomb I've become a believer in the dialogue as one of the most interesting, accessible ways of providing coverage, critique, and humor about games. Giant Bomb formats the majority of their content as conversations, be they interviews, panels, or editor-to-editor talks. Ryan was most often at the center of this conversational structure, delegating questions and taking the lead as needed. He had a quick, biting wit that could turn any conversation in a new direction, and usually for the better. Ryan Davis played a significant role in changing how I think about game journalism, and how to be more forward-thinking about where it needs to go. I also know a lot more about bees, hummingbirds, mattresses, and a million other random tangents that would never enter discussion on another video game website without Ryan at the helm.

Ryan Davis' death is a tremendous loss for the industry. My heart goes out to his family and friends.
Posted by Dan Solberg at 5:52 PM