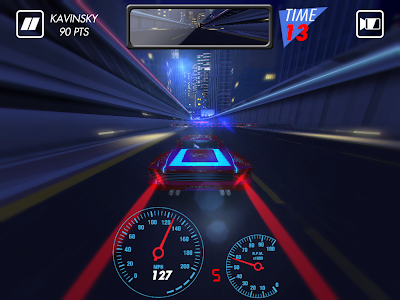 There is no shortage of nostalgia-mining, 80s-pop-culture-referencing, neon-soaked video games these days. From Far Cry 3: Blood Dragon to Hotline Miami to Double Dragon Neon, many new games are taking their cues from 1980s film, music, and games themselves and repackaging those design choices into new experiences of varying quality and originality. Now, French electro music producer Kavinsky has entered the fray with his own self-titled game, featuring a mixture of brawling and driving segments, largely composed of the same "80s" tropes that have come before.

Kavinsky's music and the fictional character of Kavinsky, a Ferrari-driving zombie from 1986, already pull heavily from 80s aesthetics, so adapting that premise into video game form makes a certain kind of logical sense. Kavinsky the game has a handful of levels (it's available for free) that alternate between Stretts of Rage-style beat 'em up stages and timed driving segments where you're outrunning thugs or cops. In fact, the Kavinksy mythos already draws so heavily from decades-old material that as a game, it's difficult to distinguish original ideas from all the well-worn references.

Before the Kavinsky game existed, the producer's music videos shed some light on his character's backstory through short vignettes of dramatic action: a car accident, a chase, a staredown, an escape, a revival. In the game, those individual shots are drawn out into levels that mostly just reinforce the original thrills through repetition, which in turn makes them less thrilling over time. Kavinsky the game is also sillier than the music videos which portray themselves with the self-seriousness that actual 80s action movies and games did. Is it impossible to use tropes from the 80s in earnest without a wink and nod to make fun of their own premise? I don't know, but that said, my favorite thing about Kavinsky is one of the sillier parts of the game: cigarettes and beer are health pick-ups and they look an awful lot like Marlboros and Budweisers for which official licenses have certainly not been acquired. Smoking to gain health is funny because it's ironic and also stereotypically French. It's a gag about Kavinsky the character, not a joke told in reference to a bygone decade. 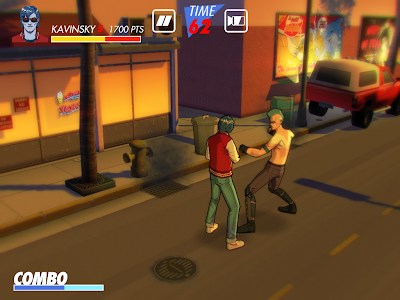 To enjoy your time with Kavinsky is to seek out those small touches, because everything else only adds up to a reskinned version of the games it's referencing. The brawler levels are basically Final Fight stages, down to the named mohawk-donning street toughs. Unfortunately Kavinsky does not control as well as Cody did back in '89. Each punch slides Kavinsky forward, often forcing you to gradually turn as you go to keep him in line. There is also no blocking, jumping, or any real strategy needed beyond mashing the punch button until the bad guys fall down. There's no reason to use the slower kick move at all except in tandem with "punch" to trigger a furious supermove when you have a full combo meter.

The driving levels are typical point-to-point time challenges in the vein of Rad Racer, right down to the red Ferrari and the Grand Canyon track. The difference is, Kavinsky isn't about racing, it's just about going. There's very little to detrimentally crash into and no need to acknowledge the brake pedal. In fact, Kavinsky's car auto-accelerates by default, making it feel less like you're "one with the car" and more like you're trying your best to keep a possessed, squirrelly vehicle pointing in the right direction. The Ferrari's neon blue trim and streaking tail lights end up looking way more badass than you actually feel behind the wheel.

Ultimately, even if Kavinsky comes off a bit loose, disjointed, and indebted to it's 80s callbacks, it succeeds at evoking the spirit of its namesake in video game form. In 2010, another French producer, Danger, released a trailer for his latest EP, showing the intro to a 16-bit video game created just for the promotion. As far as I know, that game does not actually exist, but that didn't stop me from guessing how it would play and wishing I could get my hands on it. The fact that a playable Kavinsky game exists is a cool thing in and of itself. Kavinsky may not be a standout example of fighting or driving mechanics, but it is a fun concept carried out to thorough execution.

--
Notes on the iOS version of Kavinsky: The brawling portions of the game use an on-screen joystick and buttons, and the driving levels use tilt controls by default. Both of these control schemes are less than ideal and make simple movements in the game frustrating. There are also two additional levels in the touchscreen versions of the game where you defend your parked Ferrari from waves of thugs. These stages use augmented reality, pulling the live images from your mobile device's camera to create the "ground" for the level to take place upon. Unfortunately my iPhone requires me to hold it in the bottom corners in order to use the on-screen joystick, putting my left hand's fingers in front of the camera. When the game looses sight of the original "ground" image, it stops the game and waits for you to find it again. Maybe these levels would work on devices that have a different location for their camera, but in my case, they were more-or-less unplayable. If possible, I'd recommend playing Kavinsky on a computer instead.
Posted by Dan Solberg at 10:00 PM