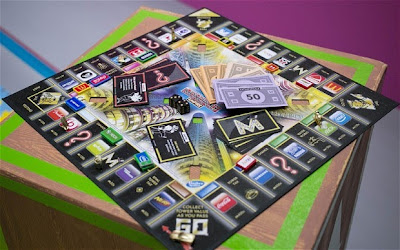 The string of reports circulating about the new version of the ever-popular board game Monopoly, designed to be played in 30 minutes, are depressing on just about every level. The big takeaway from the initial article in The Wall Street Journal was that "jail" had been removed from the game board. Later it was revealed though a multitude of other sources that the "Go To Jail" space and the jail itself had in fact been retained (see above picture). Removing the jail was an easy target to attack to game as a more realistic version of reality, one where those who control monopolies can break the law and never see jailtime, but one that doesn't make for much of a positive moral lesson for children. Note that currently in Monopoly you go to jail if you have bad luck and land on the wrong space, which implies that everyone is up to illegal business, but only those who get caught get in trouble.

Where else to go with this horrible plot? How about the Hasbro PR person's use of the phrase "frictionless gaming experience" or their coining of the term "snack toy?" How about the fact that Monopoly Empire may be the most unabashed corporate shill in game board format for the franchise yet? At the very least it casts the widest net, featuring "big-name brands" instead of land properties. How about that no one is talking about how the game actually plays differently to make it work in a half hour setting? How about that since it's a board game, it's really easy to make your own rules and change your old Monopoly board into a totally new game? You know, pushing kids (or adults, for that matter) to be creative.

A shorter version of Monopoly could potentially be interesting. However, a frictionless snack toy where you vie to control Xbox and Coca-Cola instead of thinking up new rules for an old game with your friends, kind of sounds like the worst thing ever.

:image credit The Telegraph:
Posted by Dan Solberg at 10:00 PM