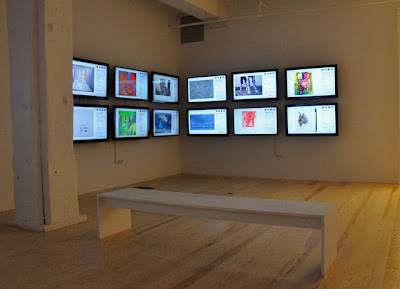 In a nice critical article by Laura C. Mallonee for Hyperallergic, she offers a critique of the Send Me The JPEG art exhibition at New York's Winkleman Gallery. The piece details some of the growing frustrations in the art world as the art marketplace has become increasingly digitized. Basically, people are buying and selling art without ever seeing the work in person, which lowers patronage numbers at galleries and has the potential to disenfranchise artists looking to make work that won't be traded about like a commodified stock option. Mallonee even mentions that many artists have sought asylum in other fields that promise wide audiences are more willing to engage in the works on display, including video games.

While games certainly seem more culturally relevant than most gallery art these days (I say this as an artist myself), they have their own problems with transitioning to digital distribution models. The art that is being ignored in galleries often requires a physical presence with the work to attain a true understanding of it. Sometimes installations stimulate multiple senses, and texture and scale never translate well in digital images. Video games on the other hand, have always been digital material, but with physical casings and controllers. The elimination of cartridges and discs in favor of direct downloads makes sense on financial and material levels. However, while many players have no love loss for the large gaming retail chains like Gamestop or piles of decrepit game cases, it's questionable whether the same level of value is still attributed to games when they become purely digital applications (see the Xbox One DRM debacle).

The annual Steam Summer Sale just wrapped up this past weekend, and I, like many people, bought a few games. Now, I love that a digital marketplace like Steam has these kinds of sales because they seem to financially benefit all involved: players can buy more games for less cash, developers can see dramatically increased sales numbers, and Valve, the company that runs Steam, takes a cut and ensures that you'll engage in their service when you come back to play the games you just bought. The story happening in the background of this shopping spree is that people are buying loads of games that they'll never actually play. These players (or shoppers, I should say) have what's called a "pile of shame," referring to the giant list of games that they own that will never be touched.

I've personally bought 3 Humble Indie Bundles containing 5-8 games each for a grand total of less than $10. I've played maybe one fifth of those games. Digital distribution for games may allow for cheaper prices, but it also puts those games in the same marketplace category as candy bars in the checkout isle of the grocery store. Games that cost $1 are impulse buys, and though the video game industry has never really been ashamed of its capitalist marketplace foundation, I can't help but wonder if the non-monetary value of individual games hasn't decreased in equal measure.
Posted by Dan Solberg at 10:00 PM