Before we get too far away from this year's Games For Change Festival that took place in New York City a few weeks back, I wanted to write about the two seemingly conflicting threads that I saw running through the keynotes. On one hand was the now-regular manta "make sure your game is fun." This sentiment comes about because most "serious games" are more concerned with delivering accurate information than probiding a fulfilling gameplay experience. On the other hand, there was also a new sentiment this year that declared "your game doesn't necessarily need to be fun." This notion was not born out of a regression from fun, back to sterile infotainment, but rather that fun gameplay might not be the best way to convey every idea a developer may want to express.

There have been an increasing number of game reviews that use the term "fun" in quotes, or describe games, as "not fun in the conventional sense." The first instance of this that I noticed was in reviews and essays about the game Cart Life, a Games For Change favorite and Hall of Fame recipient this year. Cart Life pushes players to empathize with the struggles of the main characters by carrying out tedious chores and making choices between options that have no correct answers. These characters' lives are difficult, grueling, and most definitely not fun. Wouldn't it be a dissonant, if not downright dishonest, experience for those games to be a blast to play?

Journalist and critic Leigh Alexander pushed for increased exposure of games from individuals on the margins, whose voices are rarely heard in popular and even indie game spaces. Many of these "personal games" don't play like the console staples we've grown accustomed to, and instead use accessible creation tools like Twine to expand the concept of what a video game can be. Personal games are acts of expression and palettes for interpretation. The game only needs to be as fun as the underlying concept requires, not as a prerequisite for being labelled a "game."

Prior to Leigh Alexander's presentation, professor Ian Bogost reflected on the nature of "games for change, " and whether those types of games are really the one's having a significant impact on players. He made a push for the creation of "earnest games" instead, games that though-and-through embody the concepts and systems which developers seek to express. These games would express earnestness through what Bogost terms "procedural rhetoric,"the language of games as presented through systems. All too often, games that aspire to social change feel disingenuous, as if the developers are only presenting information in game form so that the commissioning organization can show that they helped produce a game (how progressive!) about subject X. Bogost contended that most "serious games" are not fun because they fail to be fun, not because they never intended to be.

Robin Hunicke managed to both agree wholeheartedly with Bogost's plea for "earnest games" while also espousing the virtues of fun gameplay. While this may seem to put Hunicke in a hypocritical position, her company Funomena is focusing on games that use fun as a central conceit, making them earnestly fun. Hunicke is interested in the kind of fun that comes from play, as in the free-form, childlike play that few video games offer, least they be deemed "not-games" and cast into the abyss. Funomena's goal of creating games that are earnest in their campaign to be fun and socially conscious is ambitious, but their formula, not to mention the involvement of Katamari Damacy designer Keita Takahashi, seems promising.

There still remains a risk in "earnest games," especially those seeking to be "not fun" on purpose, of relying too much on empathy in directly simulated outcomes. Designer and academic Eric Zimmerman spoke of this concept as design literalism. He gave the example of a game that was in development for a school, where ultimately the endgame was that your character stays in school and learns about the virtues of doing so. In other words, it's a game set in a school about staying in school, meant to be played by students in school to detract them from not staying in school. Bored yet? He countered this by listing off games that already carry out the mission of keeping kids in school, though their content has nothing to do with that goal, such as chess club and sports teams. Zimmerman suggests that getting students to form a Starcraft team would be a much better "stay in school" proponent. 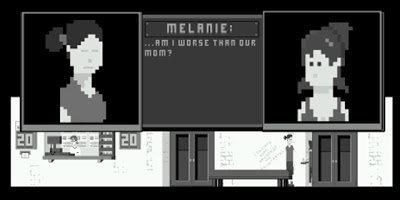 Zimmerman's theories about design literalism brought me back to Cart Life, a game where you learn to empathize with individuals, whose stories could easily translate to the struggles of innumerable people in the real world. Cart Life avoids design literalism through the player's embodiment of the struggling protagonist. A literal design choice would have been to see the characters falling on hard times from an outsider perspective and then deciding how to interact with them. For such a game it would be easy to assign the moral of "be nice to others," but it would always come off as the game telling you something instead of letting you figure it out for yourself. Playing Cart Life, you go about the banal day-to-day activities of individuals struggling to keep their head above water, and as someone who's playing the game from a position of privilege, I'm getting a perspective on life that I would not otherwise be exposed (this is the "change" part). Cart Life is a game designed with the utmost earnestness, and it's not "fun" in the traditional sense. It doesn't need to be, and would likely betray its original concept if it was.

You can watch all of the 2013 Games For Change Festival keynotes on the organization's YouTube channel.
Posted by Dan Solberg at 10:00 PM