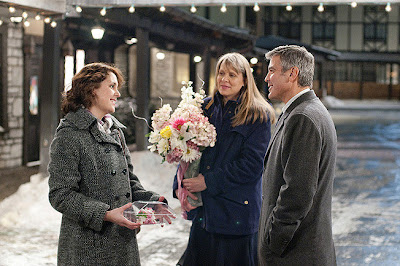 The 2009 George Clooney film Up int the Air was shot largely in the Midwest, with several scenes in my hometown of St. Louis, MO. As such, the act of watching the film has an extra layer of engagement for me as I attempt to pinpoint all of the shooting sites and consider how well they actually tie into the film's plot. For example, George Clooney sneaks back into his character's old high school, which is actually Affton High School, where my mom attended. I remember when they were shooting scenes at the Cheshire Inn, because I lived a couple blocks away and would drive past the production trucks on a daily basis. I was already attached to these places, but imagine they're just stock high schools and hotels to non-St. Louisans. On the other hand, maybe I was distracted from the film's story because I kept wandering into my own memories.

Using recognizable landmarks can be tricky business in movies, but also in games. Game developer Ben Serviss lays out his argument for why landmarks are often implemented so poorly and how to avoid these pitfalls. At the heart of the matter is aspiring for authenticity, but this can come at the expense of design. Do we really need a racing game that replicates San Francisco block for block? No, something that captures the spirit of the city will do just fine, and potentially work better with your game's particular driving mechanics. 100% is a bullet point that few players will be able to appreciate, and likely takes a whole bunch of time and effort (meticulous, boring work) to reproduce. All this before even touching on how and when to reveal real-world landmarks as part of a game experience. Check out Serviss' article for the rest of his thoughts on the issue.
Posted by Dan Solberg at 6:30 PM