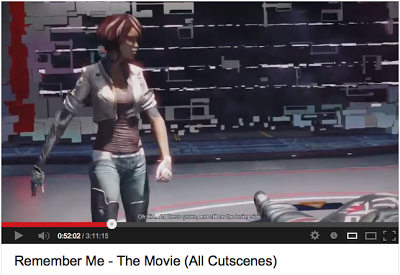 The video game / film comparison topic has been making the rounds again in the wake of The Last of Us. I've already highlighted a handful of essays on the debate, but today Paste ran a piece by Maddy Myers that put an interesting spin on the issue by considering gameplay narrative in light of YouTube videos that compile cutscenes from games and present them as "movies." Myers points to cyberpunk action game Remember Me as an example of a game that, despite its other problems, managed to fuse cinematics and interactivity with its hacking scenes in a way that incorporates the strengths of both simultaneously. It's telling that these YouTube "movie" editors included these hacking sequences despite the fact that they're actually "gameplay."

Myers also makes a strong point against quantifying gameplay as a measure of game-ness. Just because those hacking scenes in Remember Me don't involve direct character and camera control the way the action portions do, doesn't diminish they're value as part of a game. Expansive control and choice in games are not interesting systems in themselves, and neither are linear, cinematically driven quick-time events. The game is the framework that holds everything together and turns those systems into worthwhile experiences, or doesn't. There's something to playing games, even ones dominated by non-interactive cutscenes that you don't get from watching them in video form. The different parts inform one another as part of a unified experience, making cutscene compilations inherently out of context.
Posted by Dan Solberg at 6:26 PM