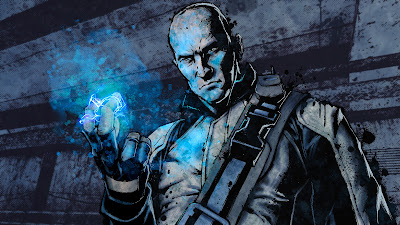 Cole has a decision to make. He just earned a stranger’s trust by defending him from some thugs. Cole can either accept a humble reward for his help or he can kill the stranger and steal everything he has. Cole checks his Karma meter, it’s glowing blue: the color of a hero. He decides it’s in his best interest to spare the stranger, accept his thanks, and earn “good” Karma points in the process. Finally, Cole has enough currency to upgrade his basic attack.

In inFamous, you play as Cole MacGrath, a courier with the newfound superpower to control electricity. You can shoot electric bursts, grind on powerlines, and even summon lighting to reign down from the sky. Cole’s story begins in true comic book fashion, a massive explosion from some kind of high-tech/magic device endowed him electric abilities but killed hundreds in the vicinity. For Cole, the event was both an accidental windfall and an unequivocal tragedy. What to make of a horrific event that blessed him so profoundly? Where to go from here? This begins the game with a clean slate, allowing you to shape your Cole as either a superhero or a supervillain. In the aftermath of the explosion, Cole’s hometown, Empire City, is overrun with mutant hoodlums and garbage-hoarding militias and it's up to you to quell their influence over the quarantined populace while getting to the bottom of the conspiracy behind the explosion that started it all.

inFamous is structured as an open-world game in the vein of the Grand Theft Auto series. You can initiate missions that progress the story, engage in side-quests that boost your abilities, or hunt around and explore the city at your own pace. In fact, the traversal and combat mechanics are the most satisfying parts of the game, presenting you with a plethora of options for approaching any given scenario. I used “shock grenades” for most situations since they were a powerful, versatile opener for most hostile situations. The grenades can be banked off of walls, stuck to enemies, and upgraded to automatically restrain weakened targets for bonus experience points. In contrast, the "story" of inFamous is comic book gibberish, told through breakneck exposition over flashy motion comic cutscenes. inFamous is much better as a vehicle for sandbox roleplay than it is at pre-written characters and three-act structure.

The central system at work in inFamous is the Karma gauge, which, depending on how you play the game, is how you craft Cole into a hero or a villain role. At key points of certain missions, you'll be faced with a decision. The game pauses and, through voiceover, Cole clearly spells out two possible courses of action: one "good," the other "evil." You receive Karma points for executing these actions, edging the needle on your Karma meter into either the blue or the red, respectively. At certain levels, and with enough experience points from completing missions, you can purchase upgrades for the powers that match Cole's current affinity. "Good" powers prioritize minimal damage and suppressive rather than lethal force, while "evil" powers make everything blow up more spectacularly, without regard for collateral damage.

The folly of the Karma system is that switching affinity is impractical. Cole either needs to be very good or very evil to maximize his powers, and the way side-missions are meted out through the length of the game, there are really only enough points to skew all the way in one direction. You can't be evil and have some good powers or vice versa. It's all or nothing, which removes the constant string of decision points from carrying any real sense of moral conscience. These choices are more opportunities to complete whichever action will reward you with Karma points in line with your current affinity.

Cole's moral choices basically dissolve to good=selfless and evil=selfish options, but since I was always making my choices based on upgrade paths, my decisions were ultimately selfish. And my Cole was supposed to be a good guy! This colored my perception of Cole to be a sort of disingenuous hero. Sure he helps people and saves the city, but he's just out for his own notoriety all the same. It becomes clear that Cole's moral decisions are actually just branding opportunities. In one side mission you even go full-on Don Draper and select which poster design you'd like your supporters to paste around town. You're going to play the part of the “guy with superpowers" either way; it's just a question of target demographics. 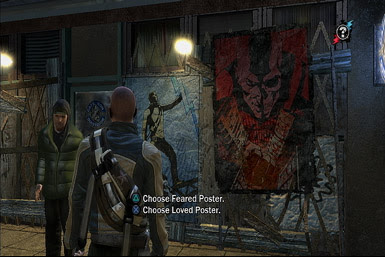 Cole's callous demeanor feels intentional on the part of developer Sucker Punch. He's a street-hardened character whose gravelly voice evokes Christian Bale's Batman. When you accomplish "good deeds" your friend Zeke calls you up to tell you how you're turning the city around and making everyone happy, and your responses are always dismissive, if you reply at all. Cole has his singular goal in mind: to get to the bottom explosion that granted his powers but sent his city into a downward spiral. There is an attempt at narrative-driven character development through Cole’s strained romantic relationship with paramedic, Trish, but every favor done for her is done begrudgingly. Any past romance is subdued, as both characters seem to bury their feelings to focus on the crisis at hand. They never get around to having “the talk” that they persistently claim to want to have. In the end you're just running errands for her in a shallow attempt to get on her good side, like any other quest-giver.

There's more to inFamous than just the morality sliders, but since Karma manifests in just about every action you take, it's by far the game’s dominant characteristic. This is expounded by just how engaging Cole's combat and traversal abilities are. Most enemy encounters involve innocent pedestrians caught in the crossfire, so you have to choose to be "good" and pick off bad guys one by one or you can be "evil" and hurl electro grenades and rockets with abandon. Downed enemies can be executed or restrained. Playing as a hero, bystanders would cheer me on and gawk in passing. Sometimes they even throw rocks at enemies to help you take them out. It’s to Sucker Punch’s credit that whether you’re playing the hero or the villain, Empire City reacts appropriately.

Still, while the initial choice between good and evil was reflected through the entre arc of inFamous, the smaller decision point scenarios are misrepresentative of actual moral dilemmas. There is never any option that does not benefit Cole in some way, and, blue or red, you rack up points all the same. Negative consequences are temporary and easily reversed. Save or kill the stranger, you’ll never think about him the rest of the game. Despite what the Karma system implies, Cole is actually morally detached, not engaged.

Who’s to say that anyone wouldn’t become a bit sociopathic given the circumstances that lead to Cole gaining superpowers? For someone with that kind of strength, the difference between saving a life and taking one is pressing “O” instead of “X.” The Karma system doesn't reflect on Cole's humanity so much as his distance from it. Video games are full of self-serving protagonists; just think about how many homes you've entered in games without knocking or being invited in. inFamous does not subvert the power fantasy, but does offer moments to reflect on video game hero privilege.

No matter who loses, Cole wins.
Posted by Dan Solberg at 9:00 PM