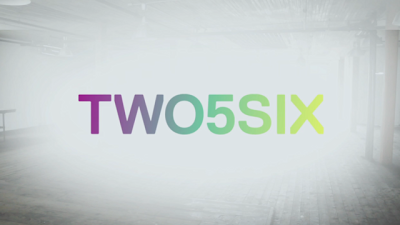 Twofivesix, Kill Screen's first ever video game arts and culture conference, took place this past Saturday at the Invisible Dog Art Center in Brooklyn, New York. Unlike the large-scale, multi-day productions of a typical technology-centric conference, Twofivesix was an intimate, focused affair that was able to say its piece over the course of just a single day. Granted, it was a long day, but refreshingly paced with breaks, complimentary refreshments, and friendly chatter. The result was a tight, fun gathering of game thinkers.

A large part of the conference's success can be attributed to its thematic, conversational format. This saw on-stage pairings between Journey executive producer Robin Hunicke and MoMA curator Paola Antonelli under the banner of "Games as Interaction" and Dance Central project director Matt Boch with Oculus Rift creator Palmer Luckey in a session titled "The Controller is Dead." All the while, Kill Screen co-founder Jamin Warren drove conversation forward, interspersing targeted questions with supplemental humor that really helped to keep the presentations agile and charming. In fact, props to Warren for holding the stage down for the better part of 8 hours. 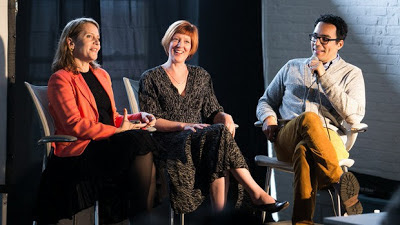 As is usual with presentations of this sort, my biggest takeaways stemmed from the topics that I knew the least about. I was fascinated by Jeff Lin's account of the tribunal system in League of Legends. Lin's team at Riot Games asked their own community for direction on behavioral standards and enacted a transparent disciplinary system designed to help players learn from mistakes. Did you know that the majority of "toxic behavior" in LoL is not from trolls or spammers but from infrequent incidents by a large portion of "normal" players in accumulation? It's true. Riot Games uses this data to skew the behavioral psychology of their gigantic player base. Having Lin on stage with Chris Poole, founder of notorious Internet netherrealm 4chan, was a genius move as well, and made for a great comparison of community management styles.

The vibe of the Invisible Dog Art Center was befitting the carefully curated DIY ambiance of Twofivesix. The venue looked a bit rundown, like the owners claimed squatters rights sometime not that long ago, but the aesthetic was also rustic and nicely complemented by an art exhibition of pencil drawings and miniature dioramas. It all seemed purposeful. The conference took place up on the second floor which was just one big room. The whole scene reminded me of when I saw Gang Gang Dance play in what seemed to be an unfinished loft in Philadelphia in 2005, but with nerds instead of music weirdos (I identify with both by the way). 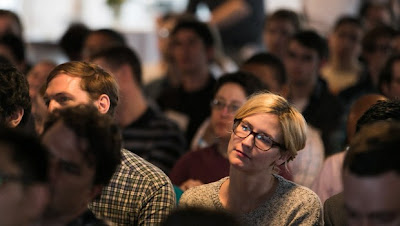 Key to any enthusiast gathering is a welcoming, conversational atmosphere, which Twofivesix did its best to provide. I chatted it up with journalists, developers, volunteers, presenters, students, and advocates over brisket sandwiches and Vietnamese iced coffee. Because food, drinks, and restrooms were all accessible within the second floor conference area, most attendees stuck around, only sneaking out for smoke breaks. The sporadic downpours also contributed to most people opting to hang inside between talks. Twofivesix's attendance was a little over a couple hundred people, if I had to guess. It was a good number. Seats were relatively full, but not jam-packed. The crowd felt like it was part of a little community, which is not always the case at larger events.

There were no Q/A sections following talks, so it was up to attendees to make the most of those conversational in-between segments. If there was something you wanted to ask a speaker, you had to engage directly as if approaching any other conference-goer. Most presenters actually stuck around for the duration of the conference, which made it a little disappointing for the few who did not. Busy schedules, I understand, but the tone of Twofivesix was such that even the folks on stage didn't come off as hierarchically "above" the masses. For what it's worth, the stage was a relatively low height as well.

I hope Kill Screen puts on another Twofivesix next year. I'd be curious to see what they'd decide to keep or change. I vouch for the return of the beef brisket, oh, and the thematic pairings of speakers from different industries; that too.

:images from Kill Screen:
Posted by Dan Solberg at 10:00 PM