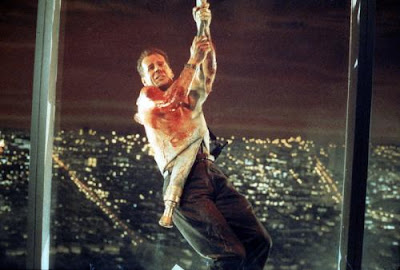 In his first piece for re/Action, Brendan Keogh dissects how depiction of struggle helps to humanize even the most invincible of video game action heroes. His primary reference is Bruce Willis' John McClane from the film Die Hard. With action movies and games we know the protagonist is going to win the day in the end, no matter how many times they're fired upon and how many times they fall from impossible heights. Keogh points out that McClane's physical appearance and progressively strung-out tenor provide a trace of the suffering he endures. Cuts and scrapes begin to mount as the film progresses; his clothes becoming increasingly filthy and torn as well.

Games do this to, but perhaps not as often as they should. Most action games grant their heroes a Disney princess level of infallibility; jumping from rooftops and dodging gunfire, with not a hair out of place. Just think of how many characters you've taken on epic adventures that appear unchanged by the experience. I think silent protagonists are supposed to make up for this by allowing players to project themselves onto their avatars, but I'd argue that while this can prompt empathy, it's not necessarily through humanization. If games are going to tell more compelling stories, they need to begin showing how characters are effected by the game world over time in a responsive, persistent way.
Posted by Dan Solberg at 10:00 PM