In a preemptive response to Microsoft's imminent Xbox unveiling, Sony has released a teaser video for the actual Playstation 4 box, notably absent from their own reveal event in February. The video shows extreme close-ups of console and controller details and a blurry black square, hiding the final device's true form. While it's all pretty silly in the context of a hype video (guess what, the PS4 will be a black box!) the detail shots, taken on their own are pretty interesting. 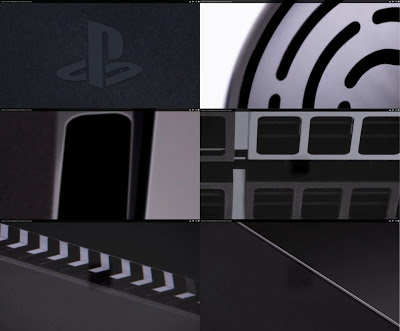 Now, since I can't really tell what's going on in these pictures, I can't evaluate the functionality of design components or anything like that, but still, there are some intriguing photographic images here. In fact, they remind me of abstract urban architecture photography. You're not really looking at the building or structure as a whole in these pictures, only the photographic composition. As such, you don't really get any information about what the PS4 looks like or does from the teaser, but maybe there is something the photographer is trying to say with these images besides "watch this space for further corporate announcements."

From the collage above, I'm most drawn to the center left and bottom right images. The bottom right picture is not quite divided in half by what could be a seam, ridge, or corner. Perhaps if it was to go directly through the middle, the line might appear to be crossing out the out-of-focus box transposed in the middle, a bad marketing move I'd guess. The center left image is a bit more complex, but retains the clean, monochrome gradients of the bottom right. If there is a PS4 in the middle of this composition it's engulfed by the cavernous void on display. It's difficult to tell where positive space ends and negative begins.Where does this dark alley, outlined by an illuminated doorframe lead?

While these are fun questions to consider at the moment, it may be hard to come back to these images after Sony shows off the units to press, who will in turn whip out their smartphones and all-too-easily obliterate the mystery. I'm just trying to have a bit of fun with the hype machine before the gadget connoisseurs dominate the discussion with hands-on purchasing advice and profitability projections (sigh). It all happens so fast.
Posted by Dan Solberg at 10:00 PM