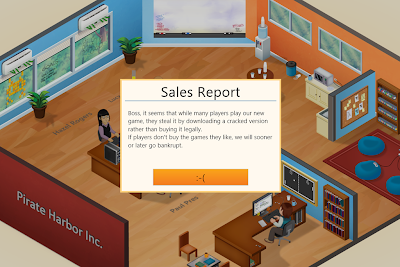 Source: What happens when pirates play a game development simulator and then go bankrupt because of piracy?
Author:Patrick Klug
Site: Greenheart Games

It wasn't that long ago that point n' click adventure/humor game McPixel garnered a lot of attention for teaming with notorious hotbed of copyright infringement, The Pirate Bay, to promote free downloads of the game. Part of the promotion also asked folks to pitch in some money for the game if they're able. The promotion got plenty of people talking about the McPixel, eventually pushing the game through Steam's Greenlight process and onto the main storefront.

Greenheart Games' Game Dev Tycoon wasn't involved in any special promotion, but as a kind of social experiment, they secretly leaked a slightly altered version of their game for pirates. The resulting data shows that an overwhelming majority of Game Dev Tycoon's players have been playing the pirated game as opposed to the retail version.

What's crazier is Greenheart Games built a special occurrence into their game development simulator for the pirated version of their game: pirates. That's right, at some point during the simulated development process, your game is pirated and your company can no longer turn a profit and progress further. The joke seems to be lost on several players who don't grasp the irony of the situation and seek solutions on forums. Check out the full article for some unbelievable quotes.
Posted by Dan Solberg at 8:00 PM