Blips: Secrets of the Colossus 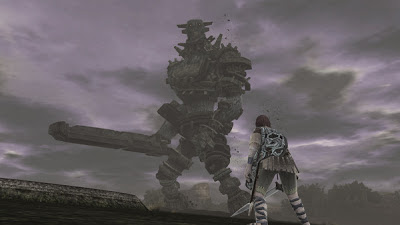 Everything in a game is there for a reason. There's symbolism and deliberate design aplenty in Team Ico's PS2 classic Shadow of the Colossus. Even though most of the landscape is empty of typical video game-y quests and characters, the pacing and journey through the vast expanses establishes a specific tone, which in turn colors the epic colossi battles when they occur. Sometimes though, the purpose of an object in game is a well hidden secret, and other times it's leftover from an element that was cut during development.

In Craig Ownes' piece for Eurogamer, he delves into a community of Shadow of the Colossus secret-seekers. These individuals have devised traversal methods for reaching areas unthinkable to the average player in hope of uncovering a hidden colossus fight. One seeker used a hacked version of the game to scour every bit of the existing terrain, discovering new landforms along the way. Still, a hidden colossus eluded secret-seeking the community.

I find the concept of secret-hunting in SotC perfectly fitting to the nature of its world. It's not that the game is largely empty, so there must be missing content, but that the game is structured around exploring ruins of a bygone age. The game is full of crumbling architecture that feels as if no one has visited for thousands of years. Secret-seekers take to the game like a relic full of riddles, concealed by code in the final retail version. It's a kind of meta-game usually reserved for the speed-run crowd (part of the SotC secret-seekers community, mind you), but here it's adventure, not execution that motives players to look deeper.
Posted by Dan Solberg at 4:56 PM