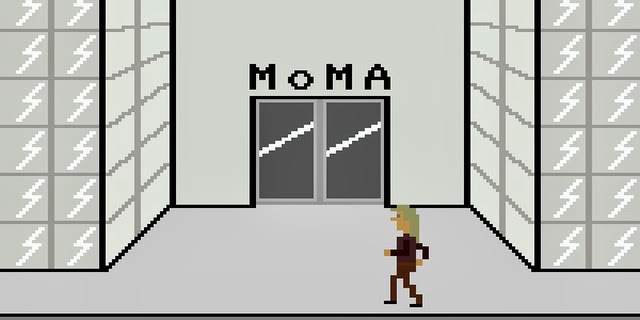 Source: The Possibilities and the Pitfalls of the Video Game Exhibition
Author: Nicholas O'Brien
Site: Rhizome

Do video games belong in museums? This is the core question Nicholas O'Brien is asking in an op-ed for Rhizome. I don't see a definitive yes or no answer here since sometimes games can be perfect fits for museums, and other times they aren't. Having seen a few of the bigger, more mainstream museums like the Smithsonian's American Art Museum and the Museum of Modern Art in New York tackle video game displays it varies by game as to how well their approaches worked. When the curatorial approach is to treat games with the standardized format used for the majority of other artistic mediums on display in the museum (work displayed as is with a wall placard of vital stats), certain types of games will benefit, while others will seem terribly neglected.

They say a typical museum-goer averages something like 5 seconds with an individual work. Games born out of an arcade tradition are likely to thrive in a museum environment because they are literally built to attract the attention of passersby, and their gameplay is constructed around an immediate experience that takes only a short time to mechanically comprehend. Control schemes for arcade-style games are also more intuitive for those unfamiliar with a particular game or modern home controllers.

However, this same treatment, when applied to Myst or any other games with layered narratives and puzzles, does the game a tremendous disservice. Even assuming the game is programmed for easy restarting for each new player, many of these games take 30 minutes or more to truly get moving to the point where its core play experience begins. And in some ways this is why we don't see many novels or full-length feature films in general museum exhibitions; the majority of visitors are there for a "museum experience" and that's comes with a certain set of expectations. Typically this involves a desire to see many different works within a matter of hours, and choosing a select few of particular interest to engage with more deeply along the way. The thing is, people like to choose these works for themselves rather than the medium dictating how much time they need to engage with something before it can "click" with them.

I don't think every visitor has to actually play games on display to appreciate them so long as they're able to understand what's happening as a spectator. Still, special attention needs to be paid for certain types of games to make more sense in a museum context, and what this is will vary by game. Not all video art makes sense on a standard flatscreen monitor, and by that same token, though most games to function within a standardized context in a home environment, that universality does not translate to the museum setting. Perhaps this is an area where museums could take cues from gaming trade shows where a "vertical slice" of the game is offered instead of the full article. Additionally, trade shows have attendants on hand to assist players in understanding the controls and ensuring that the installation is functioning correctly (another huge hurdle for high traffic institutions). Or perhaps a totally different type of installation would be more suitable for a particular type of game. How about one that uses a "black box" space to envelop players and spectators in a game's immersive, surround sound environment? That might work for a solemn, contemplative game like Proteus, but might make a lot less sense for local multiplayer games where social interaction with fellow players takes precedent.

I still want that "museum experience" when I go to a museum, and what that means for games is that I'd like my experience with games in a museum to feel unique to the setting. I own copies of several Katamari Damacy games; I don't get anything unique when the museum installation of that game a is a stand-up replica of my setup at home. I can look at photographs of paintings, sculptures, and video stills in books and on my computer, but being in the presence of those actual objects in a museum is a special experience that can't be had anywhere else. This is more difficult with games due to their general status as widely available commercial products, but if museums aren't going to try and make the experience of games in their halls special as well, then perhaps it's best to leave that task for those who will.
Posted by Dan Solberg at 10:00 PM