Behold! The Art of Video Games 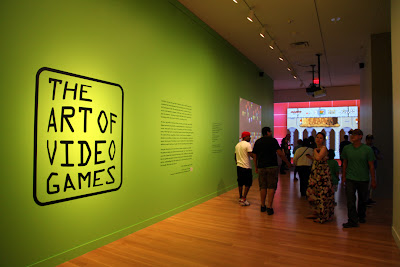 This past weekend the Smithsonian American Art Museum (SAAM) opened The Art of Video Games: a history-spanning account of the life of the medium.  It's a big coming out party for games-as-art champions who get to see the games they love stand in the limelight on a national stage.  The show was put together with great care and respect by guest curator Chris Melissinos, but perhaps the most significant thing about The Art of Video Games is that it exists at all.

The title of the exhibition is so purely descriptive it seems like it should be the subtitle to something written in leetspeak.  I imagine the reasons for such a bland header are multifold.  There's a wide audience of museum goers who know nothing about games and the straightforward title lets them know what they're in for.  It plays it safe, which could be used as a descriptor of the entire show.  It isn't surprising that SAAM would want to avoid controversy, especially in the wake of the hot water their housemate, the National Portrait Gallery, found themselves in with their Hide/Seek exhibition.  Also, the Smithsonian can be a stuffy place, and The Art of Video Games is a sign of goodwill on the part of games advocates who are willing to keep the crazy in the box in exchange for a solid dose of recognition.

The exhibition consists of three rooms: a "visual art of games" display, a hands-on arcade space, and an archival console timeline.  Aside from the hilarious video footage of gamers' faces as they play, the initial room seems geared towards showing the visual appeal and traditional craft of game aesthetics.  Concept art and storyboards are installed salon-style, and a 5-channel display shows the graphical leaps in video games hardware over the past few decades.  I imagine the first room gives non-gamers something to latch onto that's a bit more familiar for an art museum.

Moving forward, visitors enter a wide open space with a handful of large projected games to play, each contained within a giant half-cylinder "arcade cabinet."  The whole room is aglow in purple, blue, and black stenciled lights, offering an aesthetic that's very roller rink/lazer tag arena.  During the opening weekend there were lines for the multi-generationally recognizable Pac-Man and Super Mario Bros.  People were playing Myst and The Secret of Monkey Island too, but the nature of those adventure titles made them more suitable for a less crowded setting.  Along with Flower, these are the only playable games in the exhibition.

The third space, the console timeline, seems like the centerpiece of the show.  In this room, again bathed in purple, vertical structures display video game consoles individually behind glass and pair them with four games each.  The games are divided evenly into Action, Target, Adventure, and Tactics categories, offering a better glance at genre evolutions than necessarily the best or most important games on a particular system.  Each tower has a button per game that plays a video with voiceover describing why the game is of significance and additional contextual details.  Unfortunately, some of the game selections feel like an unnecessary stretch to prove their worth.  The video for TRON: Maze-Atron even admits that the game wasn't very good, yet, here it is.  It may have been a noble effort to democratize the selection process, but it's difficult to see that as a plus given some of the resulting picks; I'm looking at you Worms Armageddon.

It's frustrating to see an exhibition of video games both spread itself too thin and miss essential pieces at the same time, but The Art of Video Games does just that.  Everyone could have their list of impossible-to-satisfy omissions, but I find it hard to stand behind the absence of all fighting games and, by extension, arcades.  On the other end of the spectrum, the broad survey of games is rooted in understanding chronological history more than communicating a clear argument for why we should view games as artworks.  Perhaps "games are art" is the inherent assumption, given the context of the exhibition in an art museum, but I was hoping for a little more intellectual rumination on the subject.

I love video games, but I realize this show is only partially meant for me.  I don't go into an art exhibition expecting to adore every piece, but I do need to find resonance in the core conceits of the artists and curators who bring everything together.  This is a sentiment that The Art of Video Games ultimately achieves.   Melissinos has painted a history of games that may not be a mirror reflection of actual events, but it is a narrative that makes sense, and is actually digestible.  The show is a foot in the door for the medium that will hopefully lead to increasingly daring efforts in the future.

The opening of The Art of Video Games was supplemented by talks and panel discussions as part of Gamefest, covered here previously.