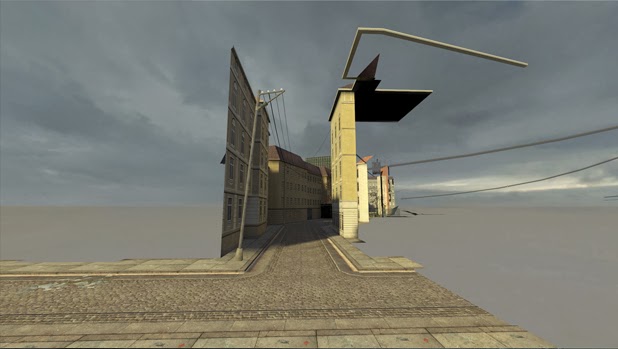 With the ubiquity of video capture in the gaming sphere, the screenshot can tend to feel a bit old fashioned. The constant technological progress of games and the media that covers them redefines screenshots as outdated documents meant for use in near-extinct print publications. However, those screenshot tools are now in the hands of players and easier to access than ever before, resulting in an uptick in virtual photographers, like myself. Granted, I've enjoyed real-life photography ever since owning one of those little toy flashbulb cameras back before they sold disposable ones, and much before digital photography was an option. I think much of what I like about photography in general translates to why I like to take pictures in virtual environments: exploring and finding sights rarely seen, transforming the familiar into the unfamiliar, and showcasing aspects of the world that I find interesting or worthy of attention.

In a recent essay, Lana Polansky writes about her own photographic explorations in the game Killing Floor, and what it is about in-game photography that makes it resonate with people. She speaks with photographer Robert Overweg (top image) about his images from Left 4 Dead and Half-Life 2 that focus on glitches in those games. Glithes, Overweg says, reveal the humanity of game design, that games are ultimately made by people despite their often cold and mechanical character. Glitches are the parts of games where someone didn't sew up the seam quite tight enough, and that actually carries an endearing quality.

But Polansky's not just talking about capturing glitches, she sees in-game photography as another way for players to project themselves into virtual worlds. As players and photographers, we take on the role of inhabitants of these spaces, wherein we document our experiences and put our personal spin on the way we perceive them. Many new games are including selfie options for your in-game character. What the selfie option does, as Polansky states, is reverse the long-standing belief that game characters are exclusively opportunities to wear someone else's skin, and instead provide a platform for players to insert more of themselves into the game. I love that games have been more readily offering these photography tools (Gran Turismo 6's photo mode simulates an actual DSLR camera) and have even made a habit of supplying my own screenshots for games that I review. Photography modes acknowledge the architectural aspects of games and allow players to interact with them as such.
Posted by Dan Solberg at 10:00 PM