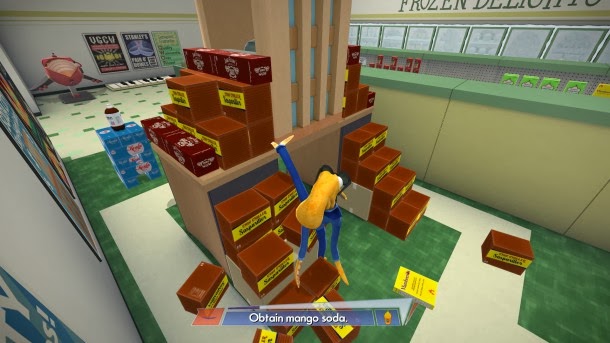 Let's keep the humor game train rolling with a piece by Janine Hawkins that discusses how the "bad" controls of Octodad: Dadliest Catch are actually a great thing. Well, I should hope so anyway; that entire game hinges on them. If you're not familiar with Octodad, it's a game where you play an octopus in a suit that is trying to pose as a normal human father. Of course he has tentacles instead of human limbs, so the results are less than graceful. Octodad is unweildly, but that's the point, because humor is the point, and as you struggle to get a grip on the game's controls, you end up causing some hilarious collateral damage. I got to play some Octodad on a PS4 back in November and greatly enjoyed my time with it. Yes, I was actually laughing aloud.

I find these physical comedy games usually make me laugh much more than scripted comedy writing in games. And, just like comedy movies, the audience has a lot to do with the enjoyment. Playing CLOP and Get On Top with someone else produces even more riotous results than it would otherwise. Local competitive multiplayer games have this ability as well, even when they're not setting out to be funny. Nidhogg isn't a comedic game, but I found myself laughing quite a bit in the social situation in which I played it, perhaps I found my own poor luck amusing, given the low stakes of a tournament with nothing on the line. Perhaps it's not even that physical comedy is necessarily more effective at generating laughs in games than scripted scenes, but that in many cases, these physical comedy games encourage an audience of more than one, which acts in the humor's benefit.
Posted by Dan Solberg at 10:00 PM