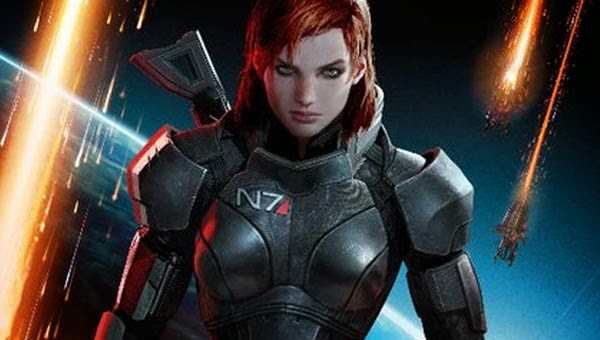 So, I just started playing Mass Effect for the first time, and I selected female Shepard for my protagonist. Now, I know a lot has been written about the Mass Effect series and FemShep, and I'm too early into it to have much to say, but something about this game feels a bit fresher because the protagonist isn't short-haired, white, 30-something, military dude. And to be fair, my Shepard is a short-haired, white, 30-something, military lady, though there are options provided to change race and hair if you so choose. Still, the gender difference is something. I simply found the default male Shepard terribly boring, and lackng any sort of charisma. He appears on the cover of every Mass Effect game, looking empty and sullen. That's not to say that FemShep placed in the same marketing materials drips with character and nuance, but she's an alternative: a new lens through which to view a robust, yet by-the-book sci-fi universe.

The logic of Keza MacDonald's article about implementing more female protagonists in games is straightforward and to the point. There's no good reason not to, and many good reasons to do so. Want to sell more copies of your game? Well, how about trying to appeal to the other half of the human population? I don't think my selection of FemShep is in any way special, but anecdotally it shows that male players don't exclusively want to play as male protagonists. Give us something else for a change! I know others feel differently about this, but for me, it's not a question of games literally matching the make-up of the real world's population. With all the power games have for projection and identity expression, literalism ill-serves these causes. However, greater diversity, even if the level of diversity goes beyond what is literally the case in the real world, is a force for a wider range of interesting stories and interpretations.
Posted by Dan Solberg at 10:00 PM