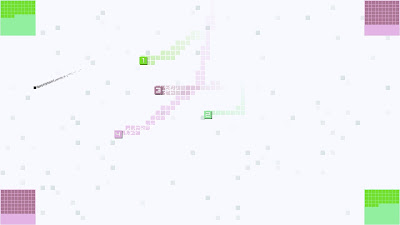 Last night at an event presented by Babycastles and NYU Poly's Game Innovation Lab, Hokra creator Ramiro Corbetta gave a talk about his thought process behind the game and his personal balance between designing and programming. This was followed by a conversation between Cobetta and NYU Professor Andy Nealen, and some questions from the audience. I'll embed video footage of the entire event once it's posted online (UPDATE: while not the full talk, NYU Poly Game Lab has produced a short video overview of the event).

The general dialogue focused heavily on how Corbetta delved into coding as a result of his frustration as a designer when he'd hand off projects to programmers and then they wouldn't come back exactly as he'd imagined. He explained this through the analogy of designing a sculpture where someone else actually does the chiseling for you. Corbetta got started with coding simply by picking up a how-to book and reading it cover to cover. After that it was all practice, trial and error, and working out problems with colleagues. If you're like me and don't know the differences between programming languages, some of the more entrenched moments between Nealen and Corbetta didn't make much sense, but the big lesson from the talk was still clear: if you're designing a game with action-based mechanics, you should learn how to code because that's where "gamefeel" is constructed.

Corbetta explained why with a simple multiplayer action game like Hokra, traditional game design scaffolding was only getting him so far. A game about passing and shooting a ball lives or dies by its execution, and that falls on the shoulders of the programmer. Hokra wouldn't get a pass on gameplay because of some new innovative design concept –it's 2-on-2 hockey. So, a lot rides on the coding side of things to make sure the game feels snappy and fun to play. As an example of an issue he had to solve through code, Corbetta spoke of a time when he was playtesting the game with some colleagues who felt that the direction that they were passing the ball in the game was not the direction they intended. Turns out this was an issue of timing and how quickly the human brain relays certain conclusions. The solution was to delay setting a direction for the ball for 3 frames after letting go of the "shoot" button, which makes the entire action feel more natural.

I'm consistently impressed by the diversity of talents that indie game makers must employ to achieve their holistic artistic vision. Its a deindustrializing maneuver that takes the tasks that are typically accomplished by separate teams, and sets that responsibility in the lap of one individual. The labor itself becomes something impressive, which sounds more in line with traditional art practice, but runs counter to the outsourcing production methods of many contemporary artists. In this way, indie game devs are sort of the microbreweries of the art world (they have the beards to prove it). While the quality of the final product remains of the utmost importance, the personality and homespun process behind it matter quite a bit too.

I remain extremely excited about the imminent release of Hokra on PS3 as part of the Sportsfriends package and will be curious to see what Corbetta gets up to once it and everything around their Kickstarter campaign is out the door.
Posted by Dan Solberg at 4:08 PM