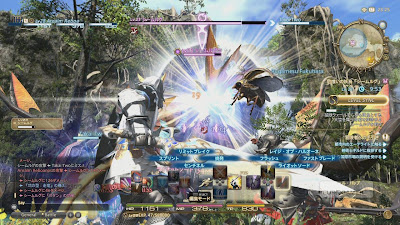 Video games have been known to possess addictive qualities, and I like to think I've been able to show more restraint from falling into unhealthy gaming patterns as I've gotten older. MMOs always seemed to be the black tar heroin of addictive video games, and as such, I've steered clear of them, scared off by tales of lost time and disintegrating real world sociability. I've never wanted to subject myself to that sort of atmosphere. Whenever I hear MMO players discuss their experiences within these virtual worlds, they often seem intriguing, if not amazing, in concept, but I have trouble seeing past the grind of the actual moment-to-moment activities and the stunning time commitment.

Simon Parkin breaks down his mostly positive experience with Square-Enix's MMO reboot Final Fantasy XIV: A Realm Reborn in a recent piece for Eurogamer. The game does seem to have it's appeal, and the story behind it's development is incredible, and a bit heartbreaking. If ever I was to be swung over to the dark side and pick up an MMO, something with the Final Fantasy name attached to it might be the reason. Final Fantasy XII and Xenoblade Chronicles showed me that I actually enjoyed combat stylized with MMO trappings, but both of those games also have preconceived narratives with definitive endings, and, much to their credit, rarely pushed me to grind. Seeing series callbacks in FFXIV just makes me want to go back and play the older games in the series, not invest in a new title that also requires a monthly fee.

I want to like MMOs. The raids, the guilds, and the performative elements are all quite intriguing, but I've resolved to wait on the massively multiplayer structure until it breaks out of the World of Warcraft mold where it currently finds itself. If MMOs were for me, FFXIV might very well be my game, but since they're not, I'll continue to observe and appreciate from a safe distance.
Posted by Dan Solberg at 10:00 PM