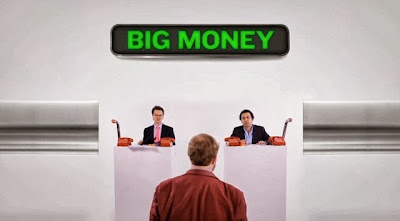 My investment in this whole horse_ebooks thing was pretty low to begin with. An infamous Twitter bot that spits out spam poetry (that's a freebie, Def Jam) wasn't actually fully automated this whole time. Or maybe it was and was just being carefully curated by a couple humans; the details are fuzzy. Turns out both horse_ebooks and the Pronunciation Book YouTube channel were both being run by Jacob Ballika and Thomas Bender, and the string of cryptic clues emitted recently by both were the lead-up to a browser-based FMV game called Bear Sterns Bravo. As a result, both the Twitter handle and YouTube account will cease further updates.

Perhaps the most important aspect of this whole string of events is the framing of Ballika and Bender's initiatives as art, even staging a gallery show called Bravospam, complete with live performances. You can call (213) 444-0102 and hear Ballika or someone else speak a horse_ebook-ish-ism into a phone. There are a few videos on display too featuring characters from Bear Stearns Bravo staring back at you, as if "waiting to be spoken to," according to the in-gallery text explanation. Additionally, horse_ebooks and Pronunciation Book are referred to as online "installations."

The common thread that supposedly ties the whole thing together was the alternate reality game (ARG) that led up to this grand reveal. Cryptic clues were dropped around the Internet and people read into the patterns of spam being emitted by horse_ebooks looking for clues. The people who pursue hunts like this are intrigued by the mystery, curious to find out what's at the end of the rainbow. In this case, as is the case with just about every other ARG, the pot of gold is an advertizement for an upcoming product. At best these reveals are predictable and don't unfairly inflate players' expectations. Such was the case with the Boards of Canada ARG earlier this year, which everyone knew was being staged by the band and ended in the reveal of a new album, which while not a revolutionary announcement, was something that the ARG players were interested in and kind of saw coming. At worst the ARG culminates in a marketing ploy for something largely disconnected from the game everyone was playing and the point of original interest. Enter Bear Stearns Bravo.

This is a problem for the gallery show as well, which doesn't forge much of a connection between Ballika and Bender's suite of Internet memes and their FMV game about financial regulation, to say nothing of either component's individual value. It hitches onto the label of "art" hoping it will solve this problem and act as the rescue copter, lifting them out of the enraged jungle of followers and subscribers who feel lied to. It doesn't fare all that well as an art show though. Even the title of the exhibition, Bravospam, comes off as a lazy portmanteau of the two distinct concepts. There's no rulebook that states a body of artwork can't have a bifurcated concept, but in the case of Bravospam, it's more of a bait and switch.

And maybe that's the point.

I've played Bear Stearns Bravo, and it's a pretty funny game. If Tim & Eric made an FMV game about the housing crisis of 2007 it would probably look something like this. You play Franco, a government regulator, charged with investigating and taking down financial firm Bear Stearns for their credit default swap practices, among other white collar deceptions. The aesthetic of the game is straight out of the late 80s and early 90s, when FMV games were popular. Everything is shot and rendered in high definition though, unlike the muddly pixels and low resolutions of those old games. Actors ham it up for the camera and knowingly diverge into goofy, nonsensical tangents about their personal lives. Your only control in the game is selecting from dialogue options when questioned. The whole thing takes less than an hour.

The best thing to come out of Bravospam is the all-too-short scene in Bear Stearns Bravo where you encounter Champion and Dynasty, two sleazy, fast-talking debt slingers. They toss glowsticks (mortgages) back and forth and yell into disconnected phones, while justifying their behavior as essential to keeping the worlds systems in motion. It's a great parody of the egos that created the housing bubble and their tenuous relationship with credibility. At one point, you can try and empathize with them by saying that regulators and bankers aren't all that different, but they quickly dismiss your remark and continue shouting into their phones, totally self-absorbed.

The horse-ebooks/Pronunciation Book ARG isn't wholly unlike Champion and Dynasty, both are convincing you to invest in something that appears one way, but yields an unexpected return. And like the real world investment banks that facilitated the global financial crisis, Ballika and Bender have opted for the crash and the spectacle. I understand wanting to move on from silly web jokes that require daily iteration. I wouldn't hold it against Dan Walsh if he stopped doing Garfield Minus Garfield and said, "OK, I'm doing this other thing instead." Surely the appsurfing generation, with their supposed short attention spans, would be able to empathize with the horrors of boredom. This, the same generation that brought us the term "catfishing," too. The goodwill from players was there, but it was exploited instead of shepherded to the next thing.

A second episode of Bear Sterns Bravo is available for $7 from the game's website. It's probably good too, but I have a hard time seeing horse_ebooks fans giving Ballika and Bender any money considering they made a name for themselves through misdirection, and I'm not sure anyone else cares enough to pay attention.

:reposted on Medium Difficulty:
Posted by Dan Solberg at 10:00 PM