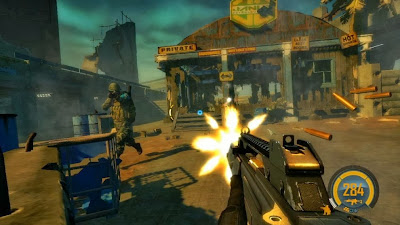 I'm really digging this post by Zolani Stewart which is the first in a series about guns in video games. I particularly endorse the use of the word "targetry" to label the action and contextual implications of gun mechanics. Targetry is a great word here because it goes beyond just shooting, and gets at the core conceit of games that present the player with a gun in the lower third of the screen by default. In most first-person games of this sort, you can't even lower your sights to speak with people; you are always aiming and everyone is always being targeted. Third person games are more conscious of this, but only marginally so.

As Stewart details, targetry seems to derail everything interesting it comes into contact with. Maybe I did have a very thought-provoking conversation with a support character, but I can't get over the fact that that character was basically speaking to me at gunpoint, and how they didn't seem phased by the smoking barrel in their face. Maybe the game doesn't care about that though and is content to just be a quickly forgotten time-filler, which is fair enough, but doesn't make for much of a cultural object worth critiquing or archiving for future reference.

Worse still "Big Budget games that are rooted in targetry end up perpetuating simplistic perspectives on complicated issues, perspectives that can even be harmful: the uncritical use of torture scenes, apolitical racism, shallow critiques of American culture and bottomless cynicism," as Stewart puts it.

But guns in games aren't inherently a bad thing, as Stewart points out; they're just missing the drama. This is the drama that can give gun violence the gravitas to be taken seriously. Having recently played The Walking Dead, I've seen that there are ways to include guns and even targetry in games in ways that ground those action with emotional weight. That I'm saying this about a zombie game (a genre that revolves heavily around headshots) should be inspirational. If a zombie game can do it, then there are probably ways to maximize the power and impact of guns in just about any other type of game. It's not that every game should aspire to be the same sort of experience, but if a game is primarily trading in targetry, then whatever else it has to say will likely go unheard.

I'm looking forward to part two of this series which will look at SuperHot, which Stewart claims "gets guns right." Should be good. Til then...
Posted by Dan Solberg at 10:00 PM