Blips: From Field to Screen 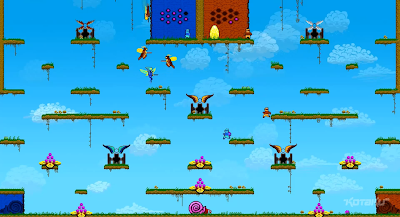 I've reached a point in my life where getting a local multiplayer game together with more than one friend is something that just doesn't happen anymore. The infrastructure of school is no longer there to act as a gathering force; the reason I enjoyed those games of 4-player Smash Bros Melee and split-screen Timesplitters in my freshmen dorm had everything to do with the human dynamics in the room. That's why a game like Killer Queen makes so much sense to me. The duo behind Killer Queen, Josh DeBonis and Nikita Mikros, originally made the RTS Joust game as a physical field game –like where you go outside and swing foam swords around. In fact, they even playtest the video game version in physical form to make sure it works. Starting from the angle of balancing not only mechanical attributes, but also physical group dynamics in a 10-person game is a strategy that seems perfectly apt.

I was introduced to Killer Queen by way of a profile by Eric Blattberg for Polygon, but will definitely be checking out next time I go to an NYU Game Center event, where the currently one-of-a-kind arcade cabinet is being housed. As is mentioned in the article, a college campus is an ideal environment for this kind of game, and I hope Josh and Nikita do end up pitching the cabinets to universities for placement in student unions, which would be ripe for school versus school network play, and, of course, local tournaments. It's something I feel like I would have been way into if there had been a machine on campus at my undergrad. I wish those guys the best of luck.

Oh, and since I've done a poor job of explaining what makes the actual game so special besides the uniqueness of it all, check out the article above or at least this video of competitive, yet fun and party-friendly play. And yes, root for the snail.
Posted by Dan Solberg at 10:00 PM