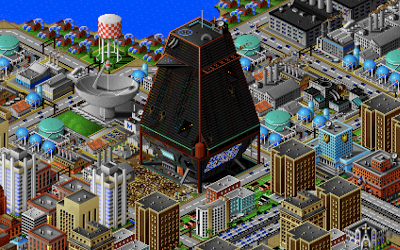 My piece on SimCity 2000 and the heartbreaking lack of real-world arcologies finally went live on PopMatters today. I'm pretty happy with it, though they didn't use my screenshot (above) that I took for them. I was playing quite a bit of SimCity 2000 at the time, but that was back in June, and I haven't gone back to my city of Teasureton too much since getting into full-on arcology production. Sure, I finished a large scale highway project and built an entire subway system, but that game is at its best when you're expanding. As neat as an arcology is, reformatting your city to be homogeneously covered in the same 4 sprite models is a pretty dull activity, and sucks the personality out of your city.

That said, I'd love to go back in at some point and start over from scratch, maybe in a mountainous terrain. I've never successfully gotten a missile silo installed in one of my cities, so that's something to shoot for. Anyway, I hope you enjoy the PopMatters piece –maybe it won't be the last time I show up there...
Posted by Dan Solberg at 4:15 PM