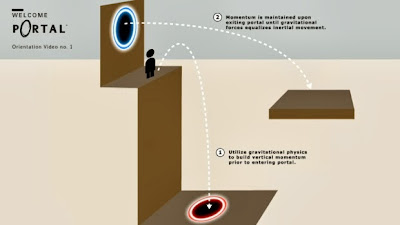 Portal's a pretty smartly designed game. I played it for the first time a few months ago, and was impressed by inventive physics-based puzzles. Portal has proven to be a tremendously influential game in terms of environmental storytelling and making your standard block-pushing minigame even more boring that it already was. There's just something kind of amazing about staring into a portal you've created and seeing an entire area, just waiting to be stepped into. It has a similar appeal to mirrored surfaces in games; offering moments where you can see your character and the world around you from a different perspective than the one offered by the game's camera.

Now, the article by Hamish Todd that I wanted to share is all about Portal's physics –specifically the "fling" technique. The picture above illustrates what flinging is all about. Basically, you set up a situation where you jump from a height through a portal on the ground, only to emerge from a wall portal with he forward momentum gained from your quick descent. The result is that you are flung forward through space. The fling ends up becoming one of Portal's core conceits, sometimes asking that you rotate or shoot a new portal in midair to change trajectory. It seems so simple, yet it hadn't really been done before –not like this anyway.

In his article, Todd walks through a number of different puzzle rooms from Portal and some of the extended challenges, showing how many different ways the fling was implemented (some great illustrative GIFs in there too). The fling was a naturally occurring phenomenon in the game engine before it became central to Portal's gameplay, as if it was something to be discovered. This reminds me of how Devil May Cry's air juggling mechanic was born out of an Onimusha glitch where enemies weren't falling to the ground after being launched above you. It's a philosophy of looking at something that happens unexpectedly and embracing it for what it is. How refreshing.
Posted by Dan Solberg at 10:00 PM