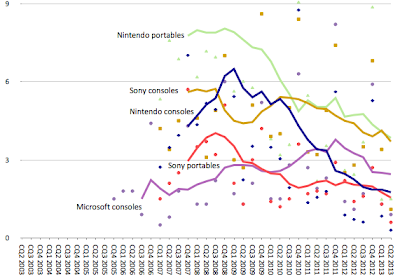 You may have run across this story on Kotaku yesterday, which links to some charts and analysis of Sony and Nintendo's video game console business by Horace Dediu and Dirk Schmidt for Asymco. The outlook for dedicated gaming devices looks bleak, but as Dediu notes, the numbers for the upcoming PS4 and Xbox One consoles haven't been added in, since they've yet to launch. Those two major console lanches could turn things around, but Dediu seems skeptical that either machine will achieve sales anywhere close to the Nintendo Wii, which saw an incredible mainstream crossover. Dediu attributes part of the downward market trend to increased prevalence and quality of smartphone games, which use devices that are multipurpose and most potential game console buyers already own.

I was struck by the conviction of so many commenters below the Asymco piece that fervently argue against this data. People who love games do not want to accept that their hobby is being co-opted by a bunch of touchscreen apps, but the statistics seem to say otherwise. Some commenters even brought up the just-announced PS Vita TV as a sign of hope for consoles, but it's much to early to project the impact of that currently-Japan-only device. For the record, I hope the new consoles do well and dedicated gaming machines continue to make sense. My only concern with touchscreen devices taking over is that currenty they're not ready to handle the demands met by gaming consoles, though they're not far off. If tablet PCs can easily hook up to televisions, support physical controllers, and also run graphically intensive games, then I'm all for it. While controllers and TV hookup are simple enough, computing power and storage will remain an issue for the time being.

Only time will tell, but, anecdotally speaking, I don't see game consoles lasting a generation beyond PS4 and Xbox One, but I do think the kinds of games that appear on those machines will continue to be made for popular devices. In the end, it's the games that matter, not the black box that runs them.
Posted by Dan Solberg at 6:38 PM