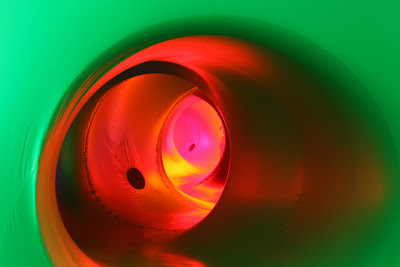 Level designers are the architects of video games. They create spaces for characters and mechanics to flourish and reflect back on those elements. Levels can evoke the personality of a setting and also educate the player on how to play the game. Level designers must consider how the spaces they create will guide players to move through the game and set expectations for what's possible. In a basic scenario, a character may have the ability to climb, but only on surfaces with dense woven textures like vines or netting. Once the player recognizes these as climbable surfaces, they'll seek out similar textures in other environments, expecting to be able to climb. Some games take a less prescriptive approach and are more sandbox-like in nature. Though they may also designate climbable surfaces in the same way, the spaces as a whole may not exclusively direct players toward climbing.

I found myself considering these open-purpose spaces after viewing pictures of Exxopolis, an inflatable luminarium most recently installed in a park in Los Angeles. Check the link above to Sarah Brin's article on the piece with accompanying pictures to get an idea of the sort of otherworldly space that exists inside Exxopolis. At what point is architecture level design, and at what point is architecture interactive art? The lines are blurred by projects like Exxopolis, which inspires exploration, meditation, and awe. Being an inflatable structure, visitors must remove their shoes, which has the added effect of evoking preparation for play, the same way children take off their shoes before entering a bouncy castle or a ball pit. The vibrant, tubular nature of the corridors is also reminiscent of tube mazes and the colored lighting effects of video games that were all the rage when that technology was new and in vogue. Small musical troupes also parade through Exxopolis at scheduled intervals, helping the environment to feel alive, and also providing a sort of soundtrack.

I can't speak from personal experience, since I've never visited Exxopolis, but it does remind me to some degree of the work of Ernesto Neto, whose cushy fabric caverns invite a similar degree of play. Likewise, I particularly enjoy level design in games that doesn't tell me what to do, but opens me up to play around and see what's possible.