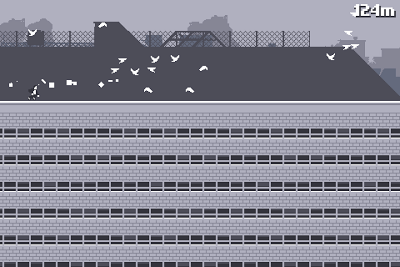 If you play games on a smartphone, odds are overwhelmingly in favor of you having played an "endless runner." Endless runners are one of the most successful genre's of games to hit iOS and Android devices, in part because of their simple control schemes that seem perfectly suited for touchscreen devices. Though endless runners existed before smartphones, they have experienced a resurgent rebirth thanks to the new platforms.

Simon Parkin's features for The New Yorker looks at Canabalt, the poster child for touchscreen-controlled endless runners. The game was the result of a time-constrained game jam competition, which pushes minimalist visual design in favor of achieving games that actually function proficiently. Canabalt's monochrome aesthetic was striking though, and the original game jam design more-or-less made the cut in the final version. In the game you tap the screen to make an always-running character jump from rooftop to rooftop with increasing speed and decreasing margins for error.

Where will the endless runner go from here? It's tough to say but, as Parkin points out, games like Bit.Trip Runner, Temple Run, and Jetpack Joyride have all iterated on the basic concept in unique and interesting ways. Hopefully the positive design trend will continue.
Posted by Dan Solberg at 10:00 PM