Blips: The Other Side of the Story 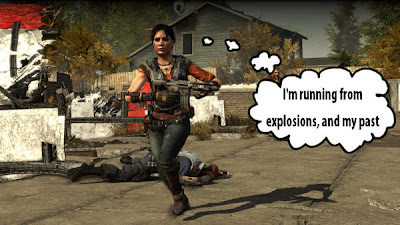 What to make of John Walker's dueling editorials on the competence of video games as a medium for telling great stories? The two pieces represent opposite viewpoints much like talking heads on cable news shows –each saying their piece without ever actually debating topics. The difference here is that since both articles were written by the same person, they represent internal conflict, one that seems unresolved.

However, certain arguments in the pro-game stories article seem to trump claims to the contrary in the other piece. Namely there's a part where Walker breaks down three kinds of narrative approaches in games, and when he gets to the third one, open-ended narratives where players, not designers, make the stories, he really makes his strongest point. In the anti-game stories editorial, Walker lists three games that he remembers having great stories in a more literary sense of the term, but makes no mention of the open-ended narrative in Minecraft and EVE Online that he cites in the other piece. Sure, bringing those games up would have strongly refuted the points he was making, but it also paints this pair of editorials as clever for cleverness' sake.

The issue isn't that game stories are doomed to be poor; there are plenty that aren't, and quite a bit of what makes others miss the mark could be corrected with a higher level of craft on the writing and performance front (a complicated issue, I'm aware). While I don't have an inherent problem with linear narratives in games, the ones that resonate most strongly are the ones that primarily use the game's mechanics to tell the story. These stories can still make use of smart writing, elegant performance capture, and fancy graphics, but treading to closely on the tropes of cinema or literature will just make players wonder why the game isn't just one of those instead.
Posted by Dan Solberg at 10:00 PM