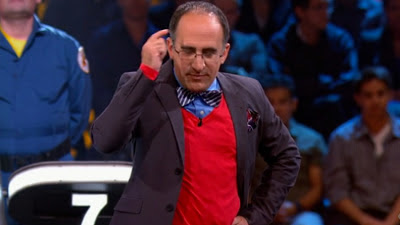 Chris Plante's Polygon feature on Glouberman is a story of a man with a passion for games that has ended up taking his life in some unexpected directions. For instance, Glouberman has been a career game show contestant, appearing on shows such as Last Man Standing, and Classic Concentration, taking home tens of thousands of dollars on successful appearances. He also created a hybrid scavenger hunt/obstacle course/city exploration game in San Francisco called Bay Area Race Fantastique in 1988. This was way before Survivor and The Amazing Race, a show which debuted suspiciously after Glouberman had pitched them his game as a reality show.

And the tale continues. Glouberman moves in and out of LA, brushing up against movie types that eventually spark a minor acting career (he even had 2/3 of the spoken lines in The Artist). He's trained as a lawyer of all things, but law doesn't inspire him anywhere near the level than games do. Check out the full story which really paints a picture of Glouberman's personality and leads you through his years of game-loving discovery.
Posted by Dan Solberg at 2:34 PM