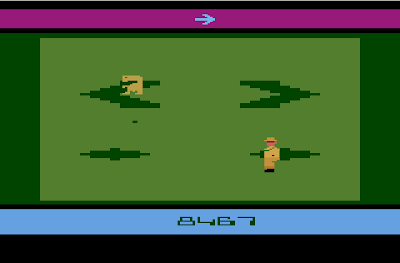 Source: Fixing E.T. The Extra-Terrestrial for the Atari 2600
Site: NeoComputer

At this point, the myth of E.T. for the Atari 2600 is far more pervasive than memories of people who have actually played the game. I have to admit that I've never touched it, but have been aware of its desert landfill reputation for quite some time. However, was E.T. really that bad of a game or is its reputation undeserved?

The hobbyist(s) behind NeoComputer set out to both prove that E.T. is a perfectly decent game, while also fixing some of the bugs and rushed design choices from the original. While this project does point out some features that were legitimately broken or frustrating in the original release, they also debunk some oft cited complaints and "bugs" in the game that are simply untrue.

I found the part about collision detection and the pits that E.T. falls into particularly intriguing. Basically the original game was programmed so that if any pixel of the E.T. model overlapped with a pixel of one of the pits, E.T. would fall in. To players familiar with other games using the modified 3/4 top-down perspective, this makes little sense. The hacker(s) changed this mechanic so E.T. only falls in the hole when his feet touch the pit, making the screenshot posted above possible (never the case in the original). Oh, they also changed E.T.'s color to brown from green, an important move for the sake of filmic accuracy.

Whether or not this makes E.T. a good game is up to each player's own interpretation, but at least these new edits make it play better than it ever did before.
Posted by Dan Solberg at 10:00 PM