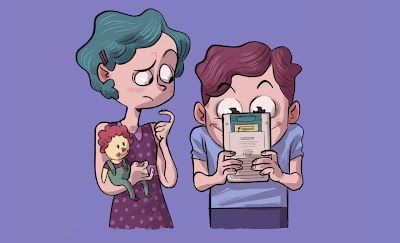 Why does everyone think video games are for boys? That's the question Tracey Lien tackles in her latest article for Polygon. Whether or not games are for boys or girls is largely a perception issue, with marketing controlling the messages in a very calculated way. Lien dives into the history of gaming audiences, back in the pre-crash days. At that time, game companies weren't doing market research, and developers were just interested in making games that were fun to play in the locations where they knew people were playing them: bars and living rooms. Both of these locations have their fair share of girls and boys, men and women, and most games seemed to reflect this "general audience" targeting.

Post-crash, game companies like Nintendo were trying to be smarter about the way they did business and were looking to minimize risk, especially with a lapsed public trust in the quality of video games. First this involved marketing video games as toys, and later as for boys. Market research told game publishers that people were still willing to spend money on toys and than the majority of video game players were male. It became a matter of putting two and two together that lead to the image of video games as "toys for boys," because that's largely what was being produced and near exclusively the way games were being marketed.

However, it seems that tide turned with the success of the family-oriented Wii and the popularity of social and casual games on gender-agnostic platforms like smartphones and Facebook. Now the male-dominated public perception and publicity campaigns ring false and even defensive at times. Yet, here we sit with the continued understanding that games are for boys when near half of people who play video games are female. Somehow social and casual games always need those qualifiers to set them apart from the "real" games, a stance which itself is macho posturing. There's nothing wrong with making video games targeted at a male audience, but video games as a medium, are for everyone.

:image by David Saracino:
Posted by Dan Solberg at 10:00 PM