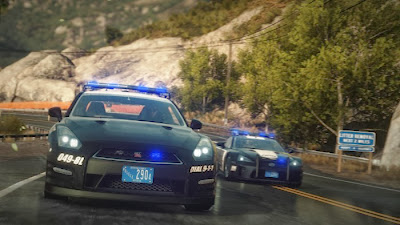 I lucked into playing Need for Speed Rivals on PS4. After several requests for a PS3 copy of the game fell on deaf ears over at publisher EA, I had resigned to not playing the game in advance of its release. However, when I picked up a PS4 for Kill Screen at Sony's review event, Rivals was among the games included in the package I received. This was surprising as well because everyone else seemed to walk away with a copy of Assassins Creed IV instead, which was part of the official list. Maybe they ran out of Assassins Creed; I don't know, but it was a pleasent convenience for me that I happened into a game that I was assigned to review instead of having to hunt one down later.

The link above is to my review of said driving game, which I found tremendously fun at times, but ultimately a game that undercuts itself. The cops and racers dynamic is imbalanced, and the multiplayer is too sparsely populated and difficult to communicate with other players. I felt a bit childish playing a cops and robbers game with such a juvenile storyline too. The PS4 launch in general carries this whole "toys for boys" vibe that is actually a little off-putting, both from the assumed gender roles angle and the aura of immaturity. I realize "play" is about letting loose and not necessarily acting your age all the time, but it's different when you can feel that targeted message beckoning you to do so.

That got a little dark, sorry. Check out my Need for Speed Rivals review for the full scoop on the game and why I compared its story to a Dadaist poem of Fred Durst lyrics.
Posted by Dan Solberg at 10:00 PM