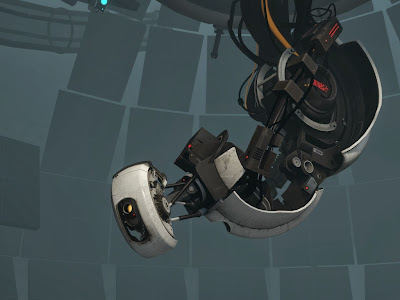 This is a cool piece about gendered AI voices in video games by Cardi Velocci. It's no accident that Apple's Siri has a female voice since studies that Velocci sites show that people prefer to listen to a female voice over a male one. Also, as Velocci points out, listeners see the female voice as more comforting and conversational, while the male voice is more authoritative and direct. How much of those male robot associations are drawn from 2001: A Space Odyssey's HAL, is debatable, but it definitely seems to have set a precedent.

In games, the most famous robot voice is probably that of Portal's GlaDos, as performed by Ellen McLain. What's great about this casting is that GlaDos takes the assumptions about the female voice as a supplier of motherly assurance, and uses them against the player when her true nature as an authoritarian overlord is slowly revealed. GlaDos begins the game as no more than a glorified laboratory GPS, but gradually breaks "character" once you stop playing by the rules she's laid out for you.

When an update was available for my iPhone, I actually switched Siri to the newly available male voice, which is still called Siri. Inflection and tone plays a huge role in the way the voice comes off, and the male Siri voice sounds nothing like the menacing deadpan of HAL, but actually seems friendly and open to conversation. Mostly I just wanted a change of pace though, as so many robots have very similar sounding female voices and, for me, they've started to present as more robotic by association in such quantity. Maybe at some point we'll just go back to wanting our robots to sound like robots. I'd be into that.
Posted by Dan Solberg at 10:00 PM