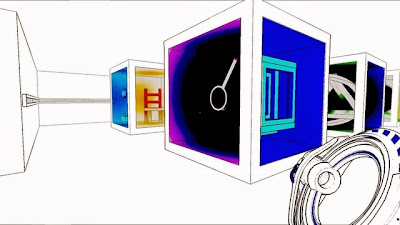 Maddy Myers really nails it with her recent piece for Paste about the institutional critique of The Stanley Parable and Antichamber. While other games like Hotline Miami and Spec Ops: The Line attempt to twist the expected campaign path back on the player, they do so at the player's expense. The curtain pulls back and the games accusingly ask, "why did you do that?" The Stanley Parable and Antichamber both satirize the role of the game developer instead, which actually further empowers players by allowing them abilities that would break most other games. In fact, "breaking" these games is part of the point. Myers begins her piece with a puzzle in Antichamber where continuing forward locks you in an endless loop, a metaphor for the typical gameplay loop that serves as a core element of game design. However, the only way to progress in the game is to break the loop and go back from where you came, a move that surprisingly leads somewhere totally new.

I haven't finished Anitchamber yet (a couple hours in), but I have a running theory that the game is about games as artworks, or rather, art as a game. This is in contrast to The Stanley Parable which is a game about games, which could be interpreted as art. Antichamber rewards astute perception, the sort that reveals hidden truths that require time and focus to unearth. The white cube space might as well be the "white cube" of the modern art gallery, the snarky puzzle hints on the walls the accompanying wall text. There's even a room in Antichamber full of sculptures in vitrines that reinforce the non-Euclidean nature of its world by appearing as different objects depending on the angle from which you're looking. How do you absorb an artwork, interpret it, and make it meaningful to you? For a painting, you look at it, study it, and live with it. The approach to Antichamber is only different insofar as the medium is different; ultimately what you're doing is the same.

Once I finish Antichamber, I'll flesh these ideas out more thoroughly (assuming I still feel the same by the end of it), but even now I can say that the game offers an opportunity to literally play with the idea of what games are and the spaces in which they can exist. That's a sophisticated level of institutional critique very few games approach, and fewer deliver.
Posted by Dan Solberg at 10:00 PM