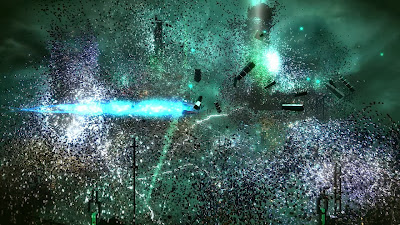 Source: Resogun is shiny, but it is not new
Author: Dan Solberg
Site: Kill Screen

My PS4 launch coverage comes to a close with my review of the side-scrolling space shooter Resogun. There's a lot to like about the game, which takes plenty of cues from old arcade games and previous revivals of said arcade games. As someone who simply enjoys space shooters, Resogun is a well made one of those, but one that ultimately feels like it's drawing much of its praise from the void it's filling in the PS4 launch line-up. Would anyone care about Resogun if it were released 6 months from now? I'm sure it would find a niche audience, but there's nothing like essentially being a pack-in title for a new console to attract some eyeballs.

That said, most arcade revival successes are cases of right place, right time (in addition to being solid games, of course). Geometry Wars is the shining example here, not only debuting with the Xbox 360, but also essentially introducing players to a new downloadable "arcade" platform, which proved to be a huge hit. That said, Resogun doesn't quite match the perfect pitch that Geometry Wars achieved. And while Geometry Wars was certainly cool looking, it didn't come off as a game that was really pushing the new hardware. Resogun can feel like it's trying a bit too hard here, with it's explosions of infinite voxels, as if it's trying to prove that the game could only exist on a machine as capable as the PS4. Kudos to Resogun's developers for excelling under the weight of all of that pressure, but ultimately that game is punching above its weight class.
Posted by Dan Solberg at 10:00 PM