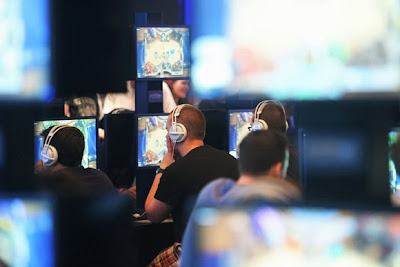 If you've sat around for the credits on any video game with a big budget or from a large studio, you've probably noticed how long they seem to go –much longer than they used to. While maybe some have slowed the scroll, more often it's because a greater number of people is required to make these kinds of games than it used to take. As Michael Thomsen's recent New Yorker piece speaks to, this has lead the majority of video game companies to outsource at least one aspect of their development process. This means that some element of most games (probably art assets) was produced outside of the country where the game company is based because it's cheaper to do so. Why keep 20 artists on staff in California when you can pay for 20 artists in Malaysia for a fraction of the price?

Thomsen also points out that these low paying outsourced jobs can be economic opportunities for the laborers that acquire them, but as far as general corporate practice goes for the commissioning corporations, it's a race to the bottom. The video game industry has a difficult enough time providing decent labor conditions for their in-house staff, let alone the responsibility for conditions of workplaces on other continents. I certainly don't expect an industry with a reputation for "crunch" labor and a high rate of worker burn out to approach a dicey practice like outsourcing with careful oversight. I'd love to see the game industry get its own house in order first, but I fear that outsourcing might actually be seen as a solution to those domestic issues instead of a simple matter of expansion.
Posted by Dan Solberg at 11:02 AM