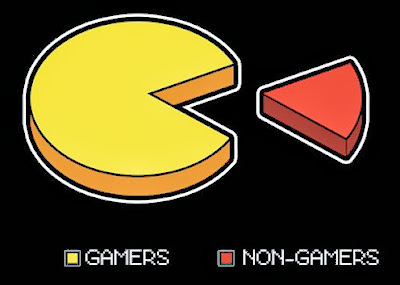 Source: If you love games, you should refuse to be called a "gamer"
Author: Simon Parkin
Site: New Statesman

In a new article for the New Statesman, Simon Parkin critically examines the term "gamer" and considers what it means to be a member of the "gaming community." It's a solid piece that gets at my own personal apprehension to using the word "gamer," and helped me better understand why I find the term uncomfortable. I found Parkin's most powerful point to be the way "gaming community" is thrown around, while no analogue exists in other pop culture media. There is no homogenous TV watching community or music listening community, but there are smaller groups that express dedication to specific shows, bands, and genres. "Gaming community" is a misnomer for "people who play games," which is, increasingly, everyone, thus stripping the original term of any significance.

As an insider in the "gaming community," I know that the term is supposed to be taken as a label for people who play certain types of games: "real" games, "hardcore" games, or any other type of game that could not be labelled as "casual" or "social" or played in a web browser. The irony of the image above is that Pac-Man was a kind of casual game in itself, debuting in bars and other social contexts for adults and kids to play alike. Would people who enjoyed playing Pac-Man from time to time be considered "gamers," or does the label imply a more concerned dedication and time investment in the medium? These kinds of elitist barriers exist in other mediums, those that separate the "likers" from the "lovers" (moviegoer v. cinephile), but somehow the general term "gamer" has been turned into a label that leaves no room for those who have not dedicated part of their souls to video games.

To be a "gamer" is to make game playing critical part of your identity on the level of an occupation. Parkin slyly points out that people who read books (another non-homogenous group) don't typically refer to themselves as "readers." and likewise, "gamers" should cast aside the label that makes them sound like a singular group (a less than flattering one, at that). All kinds of people play games, but "gamer" doesn't encompass this idea. There's a reason labels like "girl gamer" and "gaymer" have surfaced in recent years, and it's because members of those groups looked at what makes a "gamer" and they didn't see themselves. I highly suggest checking out Tracey Lien's expose from last week to learn more about how the "gaming community" came to be identified as a boys club, and some of the problems that have stemmed as a result.

It's time "gamer" went to way of the outdated stereotype it represents, or else the term is in serious need of co-opting and repurposing to better serve the actual range of people who enjoy video games.

:image by SplitReason:
Posted by Dan Solberg at 10:00 PM