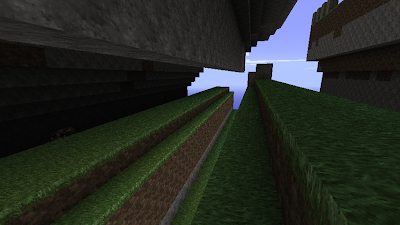 Timothy Hughes' first piece for Unwinnable is a fascinating examination of the physical boundaries of virtual worlds, particularly focused on Minecraft's Far Lands. As someone who's never really touched Minecraft, but enjoys hearing the stories about all the crazy stuff that happens there, the Far Lands might be my new favorite. Basically, the world of Minecraft is procedurally generated as you move around the environment, making the horizon ostensibly infinite. Apparently there is a hard limitation of around 7 times the surface of the Earth, which is, well, stupid huge. Anyway, the Far Lands supposedly exist a 35-day walk from a given spawn point, and are an area where the game's code becomes unstable and visually glitchy. As someone who really appreciates a good glitch, I'm way into this.

For the rest of the article, Hughes talks about the outer reaches of games and why so many people set out to find them. I'm totally guilty of this too having walked out to sea in Proteus, and scoured the far corners of Xenoblade Chronicles' gigantic world. As Hughes lists, there are a number of different reasons for doing this, but where he sees a childlike petulance to go against the games rules, I see play and the game's code placing restrictions on what kind of play is acceptable. Not that all developers should build infinite landscapes for their games, but whether a world continues on forever, builds in a natural barrier, or puts up an invisible wall will change the player's perception of that world differently. In all cases, the discovery of physical barriers in games is disappointing to players. They thought they could do something a moment before, and then the game authoritatively says "no." I think it's worth it to make the collateral damage of that discovery as minimal as possible.