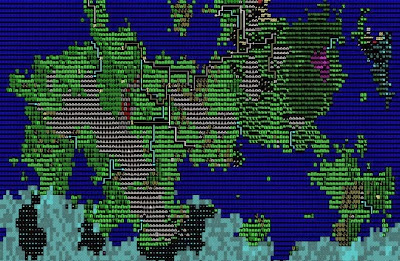 I've written about the video games in MoMA's Applied Design exhibition before, but where I focused on the interaction implementation of the playable games on display, there were other games that couldn't be touched. The way MoMA installed different kinds of controls with different games came off as experimental, and the same adjective could be applied to their strategy with the non-interactive games. A Let's Play video of The Sims, plays in place of live code, while EVE Online gets an original dual monitor video display that explains how the game functions and its immense scope. No two games seem to be given the exact same treatment, which is a bit odd considering the dry, uniform manner in which the games have been installed.

In all this, Dwarf Fortress seems to get short shrift. The ASCII mountain colony simulation game is, quite honestly, beyond me. I've watched players stumble though it, read harrowing accounts of thrilling moments from diehard players, and been "introduced" to the game through several articles aimed at the general non-gamer populace, but never had the desire to actually play it. And I think it's safe to assume that most museum visitors haven't played it either. So, the fact that the game sits in the back room as a short, audioless video loop with a bit of accompanying wall text doesn't seem to do it justice. I find it hard to imagine that anyone who hasn't played Dwarf Fortress will walk away with an appreciation for what the game does, and even less so, a desrie to go home and try it for themselves.

In the link I sourced at the top of this post, Eron Rauch dissects why he was disappointed in the installation of Dwarf Fortress in Applied Design, and offers a few suggestions for how it could be done better by taking advice from another MoMA exhibition (irony!). Even though I follow the logic of curator Paola Antonelli's decision for a sparse installation, free of material nostalgia outside of the games (code) themselves, for those unplayable displays, something else needs to exist to fill in the gaps. While this seems to have been taken into account for The Sims and EVE, Dwarf Fortress has been left to fend for itself, when we all know it's incomprehensible without a guide and a whole lot of spare time. It feels like MoMA has the answers to the questions about displaying such an unruly game, they just didn't follow though on them.

One could make the argument for the current Dwarf Fortress display at MoMA as one that avoids heavy-handed curatorial voice in favor of the work speaking for itself. After all, this is the same treatment given to the majority of works in the museum: a painting hangs on the wall with a bit of supplemental text to its side. To visitors not already in the know, this kind of display is a puzzle, it's own kind of game in a way, where the sentences, dates, imagery, materials, and everything else is taken into account as evidence in support of an eventual interpretation that the viewer can call their own (lest they be plagued by trying to figure out what the artist meant). The problem with this approach in Dwarf Fortress is that, given its unplayable display form, the amount of information the viewer has to work with is incomplete, and not enough has been done to make up the deficit.
Posted by Dan Solberg at 10:00 PM