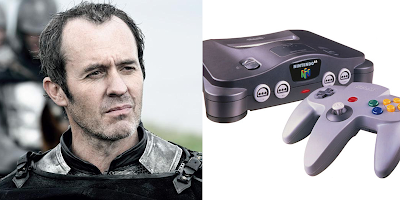 So, a cool thing happened earlier this week. I posted this comparison of Game of Thrones characters to video game consoles on my Giant Bomb blog, and it proved to be quite popular. It's currently received over 125,000 pageviews and about 150 comments, almost all of which are extremely positive. The ball started rolling slowly when I originally posted the piece at about 4am EST, which meant that the initial batch of viewers were probably European (i.e. some commenters addressed me as "mate"). Eventually the Giant Bomb mods took notice and liked my post enough to promote it in the Community Showcase slot on the front page. If things had stopped there I still would have been quite pleased, but it was only a matter of time until some outside sources started picking up the story.

After some tweets and retweets, Luke Plunkett reposted a couple of my comparisons on Kotaku, along with some nice words of his own. Then things really took off, and my original post was racking up around 1,000 views and hour. Also, since Kotaku has such a wide reach as a publication, reposts of their repost began popping up all over the place too. I even got a shout-out from Bill Corbett who was a writer for MST3K and voiced the robot, Crow, for a couple seasons.

Here's a list of all the citations I've been able to track down so far:

I'd never made a "listicle" before, and genuinely thought it would be fun (it is, or at least this one was). After the initial idea came to me, I looked up whether this had ever been done before, because it seemed sort of obvious. Turns out there was a meme that got passed around before, but it was limited in scope and lacked polish, so I felt like I was in the clear. I've been listening to the Game of Thrones audiobooks after making my way through all 3 seasons of the TV show, so this stuff had saturated my mind at a certain point. I had a tentative list going for about a month or so, and then I just realized that some of the jokes I'd written wouldn't work once the new consoles were released, so I stayed up and put all of the images together, applied the finishing touches, and sent it out the door.

What a relief it was that people actually seemed to like it! I didn't expect the level of positive response that this post got, and ironically, it seemed like a bunch of people went in expecting to hate it. In fact, I think "surprised praise" is the most pervasive sentiment in the comments. Well, that and people wondering where the SNES is (note: as a character, the SNES is boooring). I wish I could have worked in a ton of jokes and Game of Thrones references that were left on the cutting room floor, but I didn't want to force anything; that's why there's no Robb or Catelyn, for one. All in all, even though it's just a list of pop culture comparisons that gives the initial impression of being "click-bait," I'm really proud of it and glad so many people gave it a chance.

Thanks everyone!
Posted by Dan Solberg at 10:00 PM