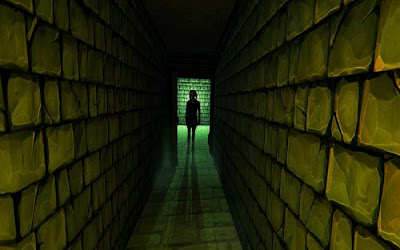 I'm not really into the swath of Let's Play-ers out there who record themselves playing horror games and freaking out at the jump scares, but I do like Giant Bomb's Patrick Klepek, and find that he tries to put more emphasis on the games he plays, than himself. On a recent Spookin' with Scoops stream, a semi-regular live horror game showcase, Klepek strapped on the Oculus Rift virtual reality headset and played a series of titles formatted for the device. The results were, of course, wonderful to watch, like those flashbulb photos from haunted houses that are taken right when a big jump scare happens, capturing the contorted faces of the recently terrified. On the other hand, the VR nature of the Oculus Rift seemed to amplify what would normally be decent enough scares into truly terrifying scenarios that, according to Klepek, may be too intense for some players.

I'm working on an interactive horror feature for another site right now, and played Amnesia: The Dark Descent to get some perspective. While the game was certainly scary at times, I definitely took comfort in specific coping tactics that would not be so readily available in a VR setting. First, the Oculus screen is right in your face, meaning you can't turn away and even if you close your eyes, the glow of the screen will still resonate. Even worse, with head-tracking, surround sound changes dynamically as you twist and shy away, which makes the game world feel even more like a real, constant place instead of an easily pausable rectangle. Speaking of pausing and keyboard controls in general, you can't see your hands or anything outside of the Oculus headset, meaning you would have to actively take off the contraption to look around you in real life, something typically done to reassure yourself that it's "just a game." Lastly, you also leave yourself very open to being messed with by anyone else around you.

All that said, I really want an Oculus Rift when they hit the market in their final form, and will certainly give games like Dreadhalls a shot. I might just need to lock myself in a secure, isolated room first.
Posted by Dan Solberg at 10:00 PM