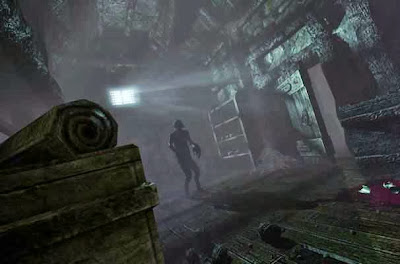 Aaand we're back in business. Let's kick things off with another bit of self-indulgence. On Halloween, Kill Screen published my piece on haunted houses as horror video game precursors. Many players speak of an intensity to the horror in video games that is not replicated in movies due to their interactive nature. In these games, you have to actively move your character into the next terrifying environment, constantly reinforcing the notion that you are both in control and totally powerless at the same time. Haunted houses employ a similar design in that you only proceed to the next room when you physically walk there, and everything that happens, happens to you, not to a third-party for you to watch from a distance.

I'm not a horror guy and this was the first paid assignment Kill Screen gave me. It was an offer to go to a haunted house and report on my experience in relation to horror video games. I couldn't turn it down because I'm not in a position to turn down that kind of assignment right now, but I definitely hesitated. Not only would this mean going to a haunted house, which seemed like a scary prospect that made me a little uncorfortable, but I'd also have to play a horror game for research. I'd owned the notoriously scary Amnesia: The Dark Descent for over a year, but never played it, and now I had no excuse. I did, but by the end, I was left thinking that most of these "scary" experiences are not as frightening as they are in my mind before engaging with them. That's not to say I've turned into a horror fan (far from it) or that nothing scares me, but I think I've learned how to better enjoy interactive horror in general instead of steeling myself against such experiences.
Posted by Dan Solberg at 10:00 PM