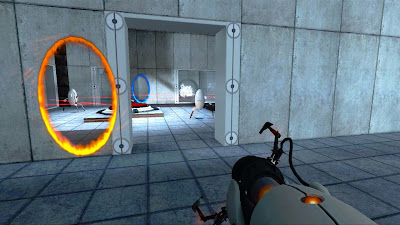 Portal is the only Valve game franchise that I care about, and in a new feature for Eurogamer, Simon Parkin explains why that might be the case. Portal shook up the first person shooter genre by making your gun a puzzle-solving navigation tool instead of a killing machine. It's a mechanically subversive game in light of the commercial dominance of shooters, but it also executes on an ambitious narrative that brings those mechanics, it's aesthetics, and its characters full-circle. As Parkin notes in his conclusion, it even resists then normal sequel structure for games where the second pass is usually better than the first. Not to put down Portal 2 (a fine game), but Portal did not need a sequel; its story is a parable, not an epic.

Parkin's remark about Portal's non-existent influence on the video game industry is questionable though, but I will buy it in a very specific context. In my opinion, Portal was most influential for it's use of physics and puzzle boxes. There have even been a few games that take Portal's puzzle-solving structure and apply different mechanics, like Magrunner, Q.U.B.E., and Quantum Conundrum, not to mention more distant cousins like Antichamber, but even in games where this isn't the core conceit, the influence of Portal can be felt. Now, perhaps Parkin is referring to the mainstream, in which case the bullet-gun shooters still reign supreme and have all but ignored the larger lessons or Portal when looking at the industry's broad strokes, but I'd argue that the influence is still quite pervasive in those games; it's visibility is just a bit more subtle.
Posted by Dan Solberg at 10:00 PM