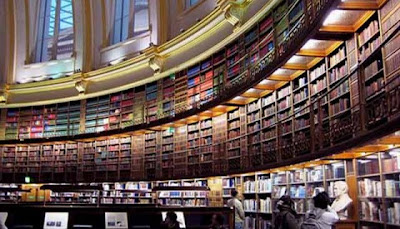 Source: At Libraries Across America, It's Game On
Author: Sami Yenigun
Site: NPR

In many libraries across the US, you can play video games as part of regular library services. In some, you can check out games to play in the library on public systems, but others allow you to old-school rent games (for free, of course) as if they were books or DVDs. This is a fascinating development and one that I hope continues to gain momentum. Video games are at a sort of crisis point as far as preservation and access to previous generations go. Having public repositories for games is a great first step. It helps to give games a historical physicality, though, from the NPR report I'm citing, libraries are mainly focusing on current hardware.

Some may object to libraries adopting games, claiming that they're just using them as a tool to bring young people to the library in hopes that they look at some books while they're there too, discounting the potential educational value of games. I don't think this is the case though, and have no problem with using games as a entry point to visiting the library. If anything, having both games and books available within the same facility then offers a more well-rounded curriculum for learning, particularly with multiplayer games or games that are played in a social context, something that the solo experience of reading rarely offers.

When I worked at the Hirshhorn Museum, this was a major goal of incorporating games into the teen center curriculum. I picked games for our collection that showed unique artistry, but also knew that just having 360 and PS3 setups on huge gorgeous screens was going to be a powerful attraction tool. The end goal was never to just get teens in the door, playing games though; that was just step one, a vital and recurring part of the process, and not simply a stepping stone. Still, we had a ton of other digital media tools that teens who would come for the games could then check out between matches and potentially, in a best case scenario, discover a passion that they never knew they had (also maybe visit the art museum proper). Our approach was to cultivate all-around new media literacy, and these forward-thinking libraries are definitely on the right track.
Posted by Dan Solberg at 10:00 PM