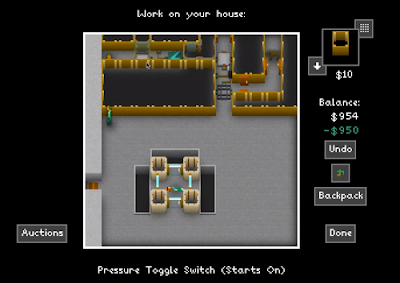 Well, Jason Rohrer's home invasion/security game The Castle Doctrine is certainly proving to be quite the conversation starter, and it's not even out yet. The game, which centers around the titular Castle Doctrine, which is an American legal principle wherein individuals are justified in using lethal force against perceived threats inside their home puts players in the role of a paternal figure who must both fortify his home to protect his family, and break into other players' homes to steal from them. The concept of "perceived threat" is a politically charged issue with a great deal of visibility right now due to the Trayvon Martin court battle and the state of Florida's "stand your ground" law. However, Rohrer seems less interested in making public comment on this hot-button issue and instead focusing on his own personal experience as the de facto "defender" of the household.

In an enlightening profile in Gamasutra, Leigh Alexander discusses Rohrer's motivations for making The Castle Doctrine, as well as his reactions to the controversy stirred by media around his unreleased game. I feel the unreleased nature of this title is a huge caveat in the criticisms that have been leveled against the game so far. By the sound of it, players are supposed to learn to care about their family of characters though repetitive play, which is a concept that only exists and succeeds or fails in theory until we can actually play it. Likewise, Rohrer feels that critics of his game are misreading what the game is saying, and I'm inclined to refute that statement on the principle that meaning is not bound to the singular track of authorial intent, but if these critics are going off of interviews and small gameplay samples, they may indeed be misreading the work, because they're judging based on literal or conceptual fragments.

By all accounts, The Castle Doctrine seems like it'll be a pretty disturbing experience, and I'm curious to find out how prescient or out of touch it ends up being, once I can actually play it for myself.
Posted by Dan Solberg at 10:00 PM